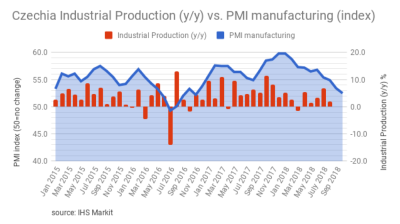 Czech turns in weak manufacturing expansion, according to Markit PMI for October
By bne IntelliNews November 2, 2018

The Czech IHS Manufacturing Purchasing Managers Index (PMI) slipped to 52.5 in October from 53.4 in September, the weakest growth for almost two years, figures released by IHS Markit on November 1 show. The latest reading was well below the highs seen at the beginning of the year, but still above the 50 no-change mark. The market had been anticipating a PMI of 52.31 for October.

The release of new products and greater new business were cited as factors driving growth. New orders received in manufacturing industry increased only slightly in October, showing the weakest rise in the current 26-month sequence of expansion. Also, a slowdown in the automotive sector was behind weaker new order growth.

The companies expressed a lower degree of confidence in future output growth. The level of optimism was the weakest in over five years as trade wars and lower demand in the automotive industry fulfilled expectations.

"The Czech manufacturing sector started the final quarter of the year on a slightly weaker footing, with the PMI falling to an almost two-year low. The expansion in output remained lacklustre in comparison to earlier in the year and new orders only increased marginally,” said Economist at IHS Markit Siân Jones.

October also posted a slower increase in manufacturing firms' workforce numbers. According to Jones, the rate of new jobs was the slowest since August 2016. Some companies stressed a shortage of skilled workers in the labour market and an increase in salaries.

In terms of price growth, input prices faced by goods-producing companies continued to rose in October, due to higher raw material and fuel cost, as well as lengthening of supplier delivery times, reportedly due to capacity shortages. Output cost rose significantly amid greater cost burdens and capacity pressures.