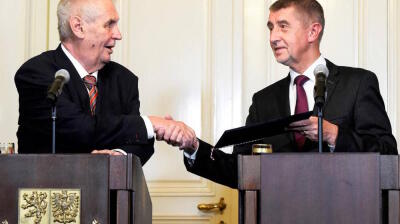 The unprecedented move could allow the former Social Democrat leader to ensure that a figure close to him continues in one of the highest offices of the state in case his ally, opposition leader Andrej Babis, fails to win the election to succeed him as president in January.

Both outlets reported that appointing a Constitutional Court head while the current one is still in place would be a dangerous precedent for the Czech justice system, and could plunge the country into the same kind of constitutional crisis over the judiciary as currently rages in Poland.

It is unclear what legal steps could be taken against such move, or whether the manoeuvre could be countermanded by the incoming president.

“I cannot say what is realistic, but strictly legally speaking appointments to occupied posts cannot be made,” said Rychetsky, a former cabinet colleague of Zeman who has since broken with him.

“Zeman would meddle with the rights of his successor,” said Jan Kysela, a lawyer and political scientist from Charles University,  adding that “it would be an attempt to prolong Zeman’s era”.

The outlets cite several sources from the justice system, as well as legislators and unnamed sources from the cabinet. Controversial Justice Minister Pavel Blazek of the rightwing ODS party, who has openly cited his good relations with the  president, said he has been aware of this information "since the summer from lawyer circles”.

“In the last couple of months we have not spoken about the Constitutional Court with Mr. President at all”, Blazek was quoted as saying by Seznam Zpravy. The outlet added that another source close to the government confirmed that Blazek is aware of Zeman’s plans.

Seznam Zpravy reported that Rychetsky’s successor would be Josef Fiala, who was appointed a constitutional court judge in 2015.  In  2012 Vratislav Mynar, the then chairman of pro-Zeman party SPOZ who later became Zeman’s presidential chancellor, described Fiala as SPOZ’s candidate for the Czech Senate.

“Leave this [question] aside, thank you”, Fiala responded to queries by Seznam Zpravy.

If this manoeuvre is carried out, it would be high on the list of Zeman’s storied record of controversial moves in which he pushed his constitutional rights to the limit or even beyond. In June 2013 he appointed a technocrat government led by his former minister Jiri Rusnok, and he maintained it in power until January 2014 even though it never won a vote of confidence.

Zeman has also tried to pursue his own foreign policy, involving closer links with Russia and China, though this has since collapsed.

This March Zeman issued a highly controversial pardon to  Milos Balak, head of the Lany presidential forests, who had been sentenced to three years'  imprisonment for his role in rigging the public tender for the construction of a CZK200mn (€8.2mn) water retention project in the Lany forests.

Respekt magazine also notes that Zeman and his political allies are planning the appointment of another judge to the Constitutional Court to fill the seat vacated after judge Katerina Simackova left for the Court of Human Rights in Strasbourg. The magazine cited the name of Jana Tlapak Navratilova of the Law Faculty at the Charles University, whose nomination was reportedly discussed with senators by ODS legislator Marek Benda.

Navratilova is a relative of the former justice minister Pavel Nemec, who was responsible for enacting much of the legislative measures which are at the root of the persisting personal debt crisis in Czechia, including granting of extensive rights to bailiffs and turning enforced debt-collecting into a lucrative business.  Zeman’s chancellor  Mynar has also been documented to maintain close ties with bailiffs and the enforced debt-collecting business.

“I would consider this [Tlapak Navratilova’s nomination] as a ridiculing of the law if one of the partners in Pavel Nemec’s law firm, which [was responsible] for boosting the immoral business with debts was to be appointed a Constitutional Court judge", Senator Hana Kordova Marvanova was quoted as saying.

Polarising presidential campaign will leave a mark on Czech politics
VISEGRAD BLOG: When Eastern European states speak out they are now listened to
Treatment of Czech Roma and violence against women called out in UN human rights report