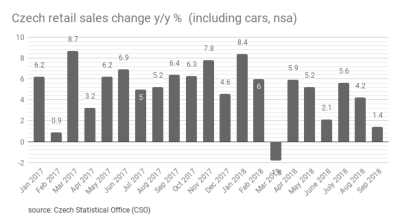 Czech retail trade up in September, driven by rising online sales, but demand is slowing
By bne IntelliNews November 6, 2018

Czech non-adjusted retail trade slowed to 1.4% year-on-year in September at constant prices, down from 4.2% in July, the Czech Statistical Office (CSO) data released on October 8 showed.

Seasonally adjusted sales in retail trade, excluding motor vehicles and motorcycles increased by 0.6% at constant prices in September m/m. the overall increase in the retail trade was largely driven by an increase in turnover in sales via online shops.

“The price deflator related to the corresponding period of the previous year (VAT excluded) was 101.9%. It was influenced mainly by higher prices of automotive fuel, dispensing chemist, medical and orthopaedic goods, cosmetic and toilet articles, food, and other household equipment. On the other hand, prices decreased in retail sale of information and communication equipment in specialised stores, retail sale of clothing and footwear, and retail sale of cultural and recreation goods in specialised stores,” the report stated.

"Sales of clothing and footwear were influenced by the weather. Last year, summer sales and purchases for autumn clothes were taking place already in September, this year's warm weather did not inspire consumers to do shopping,” said CSO Director of Department of Service Statistics Marie Bouskova.

Non-adjusted sales for sale and repair of motor vehicles fell by 9.7 % y/y. It was expected by the experts as “there have been problems with new emissions standards since September, which have cut sales in a number of models over the past few months," told ING Bank's chief economist for the Czech Republic Jakub Seidler the Czech News Agency (CNA).

Sales growth were boosted by rising wages, according to analysts. The saturation of demand is also beginning to show. "Households are starting to realize that economic growth is slowing so they are starting to create reserves," said Komercni Bank analyst Monika Junicke.

According to analysts, the slower growth in retail sales could have an impact on economic development. "If September is not an exception then retail sales will grow slowly in the next months. That would mean a slowing down of the key engine of our current economic growth – household consumption," said Deloitte analyst David Marek to CNA.