Czech unemployment down to 3.6% in August 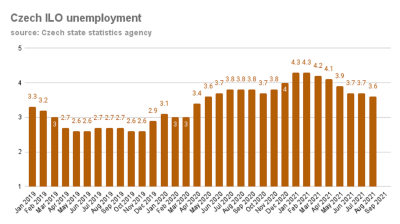 Czech unemployment fell to 3.6% in August, down from 3.7% in July and by 0.2 percentage points year-on-year, making it the lowest among EU members (2.8% in July according to data by Eurostat), the Labour Office reported on September 6.

"Compared to last year, thanks to government support and programmes such as [employment support programme] Antivirus, economic activity has recovered in the areas most affected by the pandemic, mostly in gastronomy, hotels, services and transport,” said director at the Labour Office Viktor Najmon.

“The expected increase in the number of unemployed people did not take place after the economy started to recover, on the contrary, employers started to hire new employees," Najmon added.

The highest unemployment was recorded in Moravskoslezsky Region, at 5.4% in August, followed by Ustecky Region with 5.3% and Karlovarsky Region with 4.7%.

The Kremlin secretly commissioned a series of focus groups to probe public attitudes about the war in Ukraine, and the findings aren’t encouraging for Russia’s president, Meduza reports.

Russia’s international reserves up by $10bn in the first week of November to $552.1bn