Czech unemployment further down to 3% in May 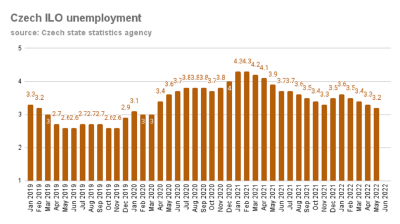 Czech unemployment rate fell by another tenth of a percentage point to 3.2% in May, show new figures released by the Czech Labour Office.

There are 235,468 jobseekers immediately ready to start working listed in registers, which is a drop of 8,190 month-on-month and 50,354 year-on-year. The number of job vacancies fell by about 7,000 compared to the previous month to 337,331 persons

"The labour market continues to be affected by seasonal work, which is in full swing. Especially in construction, gastronomy, tourism, agriculture and horticulture, but also in forestry, fishing, spa and mining," commented Viktor Najmon, Director General of the Labour Office

Najmon added that seasonal jobs will continue to be advertised in the coming months, thus the unemployment could fall even further. "But everything will also depend on the development of the war conflict in Ukraine, the number of newly registered job seekers among Ukrainian citizens and, last but not least, the impact of the energy crisis on employers," he noted

According to him, the arrival of Ukrainian citizens has not significantly affected the Czech labour market so far. They are mainly women who mostly perform physically not demanding jobs. "In addition, they prefer short-term work opportunities and, with regard to children, also single shifts," Najmon said.

The lowest unemployment rate in May was reported by the Pardubice Region (2.1%), while the highest rate by the Usti nad Labem Region (5.1%).

The drop in unemployment at this time of year is typical and is due to the traditional seasonality and the arrival of warmer weather. The share of unemployed persons is thus the lowest since March 2020, before the pandemic started affecting the labour market," said Jakub Seidler, chief economist of the Czech Banking Association, as quoted by the Czech News Agency

According to Radomir Jac, analyst at Generali Investments, there is still a hunger for employees on the domestic labour market, but given the expected slowdown of the Czech economic performance, he believes that labour market pressures in the form of a shortage of workers should ease in the coming quarrters.