Czech unemployment rate down to 3.3% in April 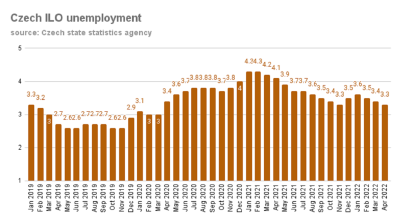 The Czech unemployment rate fell by 0.1 percentage point (pp) month-on-month and by 0.8pp year-on-year to 3.3% in April. A total of 243,658 people were unemployed, down by 9,215 persons m/m, according to data published by the Czech Labour Office.

"Seasonal work is already in full swing, especially in construction, gastronomy and tourism, as well as in agriculture, horticulture, forestry and the spa industry. Spring cleaning of public spaces as part of public works also takes place in April,” said Viktor Najmon, General Director at the Labour Office.

"As far as the outlook for the next months is concerned, everything will depend on the economic development with regard to the development of the war conflict in Ukraine or the current pandemic," Najmon noted.

According to available data, 35,943 Ukrainian refugees have found jobs (mostly as manual workers, construction workers or in the transportation industry) in the Czech Republic since the Russian invasion started. "Currently, they are looking for short-term jobs because they believe they will return home soon. Therefore, even if they have higher or specialised qualifications, they are interested in manual jobs,” he added.

"Even though the result was slightly worse than we had expected in our forecast, the Czech labour market remains very strong. Neither the war in Ukraine nor the influx of refugees from this region has had a negative impact on it," commented Raiffeisenbank analyst Vratislav Zamis for the Czech News Agency. He believes that the room for further improvement is limited, and the risk is the overall uncertainty about the impact of the war in Ukraine.

Jakub Seidler, chief economist at the Czech Banking Association, added that a slight rise in the unemployment rate in the second half of this year now looks more likely.

Russians' attitudes towards the US have nose-dived to their second worst level on record.

Russia’s CBR slashes key rate to 11% ahead of schedule

The Central Bank of Russia held an unplanned ahead-of-schedule policy meeting on May 26, at which the board of the regulator slashed the key interest rate by 300 basis points from 14% to 11%.

Albania’s electricity generation fell in Q1, forcing the country to increase imports more than sevenfold at a time when prices are soaring.

Growth will be driven by tourism and construction, but slowed by sharply rising prices – inflation has already exceeded the central bank’s 3% target.

Polish retail sales grew 19% y/y at constant prices in April, the growth rate nearly doubling versus a gain of 9.6% y/y the preceding month.