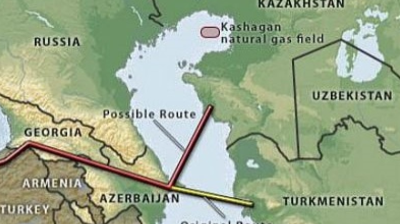 Despite grand idea, the TCP has been going nowhere for years.
By bne IntelIiNews August 23, 2020

“Daunting” challenges lie in the way of those minded to revive the Trans-Caspian Pipeline (TCP) project that would deliver Turkmen gas to European Union states via Azerbaijan, Georgia and Turkey, according to a senior fellow in the Global Energy Center writing for The Atlantic Council think tank.

Addressing the question as to whether the project is “still a pipe dream”, Daniel Stein noted the impending completion of the Southern Gas Corridor (SGC)—designed to deliver Azerbaijani gas as far as Italy—has led to renewed interest in TCP.

Wrote Stein: “The SGC will soon be fully operational, delivering 10 billion cubic meters per annum (bcma) of natural gas from Azerbaijan’s Shah Deniz gas field to customers in Southeast Europe. However, while the SGC will advance energy diversification, its impact will be limited by the relatively small volume of gas it will deliver—10 bcma into a European market of 450-500 bcma. That is why the United States and the EU have long promoted the concept of a 30 bcma TCP, which would provide access to Turkmenistan’s prolific gas fields.”

Stein observed that a Center for Strategic and International Studies (CSIS) article argues that there are four critical ingredients for successful transnational pipelines, namely a dedicated source of oil or gas, a competent commercial champion, favourable economics and political support.

How does it stack up?

He continued: “How does TCP stack up against these four critical elements? First of all, there is no dedicated source of gas. Turkmenistan has huge gas reserves, but while production at its newer gas fields has increased in recent years, the bulk of it is committed to China under long-term contracts. The production capacity at older fields, which previously supplied Russia, is unclear and it is safe to assume their capacity has been reduced. Therefore, a new source of gas would have to be developed to supply TCP.

“Second, there is no one currently willing or able to play the role of commercial champion for TCP. If an international oil company were given an upstream stake in Turkmenistan, it would be in a position to develop the resource base needed to fill the pipeline and act as its commercial champion. However, the Turkmen government continues to prohibit foreign investment in onshore gas production."

Even if the requirements of an adequate resource base and a competent commercial champion were met, it would be unlikely that Turkmen gas could be delivered to Europe profitably, said Stein.

He continued: “Not only is the cost of developing the gas high—given that Turkmen gas has a high sulfur content—but the entire delivery chain is also expensive. While Turkmenistan has constructed an East-West pipeline connecting its large fields with the Caspian Sea, it has not installed the compressors needed to move 30 bcma of gas. Add to that the cost of TCP itself just to get the gas across the Caspian.

To deliver the gas to Europe, the string of pipelines that constitute the SGC could be expanded, but at most only by 15 bcma, which would mean additional investment in brand new infrastructure for the remainder.

Looking at how TCP measures up regarding political support, Stein concluded: “No doubt TCP has political support—Azerbaijan and Turkmenistan, as well as both the United States and the EU, have consistently voiced that support. But as we have seen from experience, political support is a necessary, but not sufficient condition for success. It does not substitute for and cannot itself create the commercial and economic preconditions for success.”

He added: “The flip side of political support is political opposition. While Russia opposed the 10 bcma SGC, it ultimately decided to instead compete with the project. In the case of TCP, the threat of much larger volumes of Turkmen gas entering Europe could motivate more serious Russian efforts to block the project.”

Stein advised: “TCP has great political appeal and is destined to remain alive for many years, if only on PowerPoint presentations.  In the meantime, it will provide fodder for politicians and bureaucrats (ignorant of or not understanding commercial realities) and be a continuing source of income for consultants and would-be project promoters.

“Finally, there is a downside to policymakers focusing attention and efforts on grandiose projects like TCP that are unrealistic, or on creating new, duplicative structures (the Three Seas Initiative comes to mind), which are mostly just empty rhetoric. Such efforts risk diverting needed attention away from more realistic but less sensational policies, such as market liberalization and integration.”

Despite the always-present danger of Russian aggression, and the subsequent military occupation of one-fifth of its territory, Georgia managed to survive as democratic state and now it is to going to vote again for the tenth time on Oct 31

Despite short-term volatility caused by the pandemic in 1H 2020, the Balkan region could be one of the relative winners globally in the post-COVID era.

The global economic recovery continued throughout the quarter, and the OECD now expects world GDP for 2020 to contract by only 4.5%, compared with 6% in their previous forecast from June. Equity markets have done better than expected.

As the death toll mounts among both Armenians and Azeris in the disputed region of Nagorno-Karabakh, the situation in nearby Georgia feels a million miles away. In the throes of both a parliamentary election and a growing Covid-19 epidemic, the fact

From October 8–15, the Kyiv International Institute of Sociology (KIIS) conducted a nationwide poll asking Ukrainians about the state of the country and their perceptions of its parties and politicians.

COLCHIS: A thirty-year journey of Georgian democracy
20 hours ago
COMMENT: Why the Balkan region should be on investors’ radar screens
7 days ago
COMMENT: Improving sentiment in global markets amidst uncertainty
7 days ago
COLCHIS: Georgia’s Karabakh conundrum
8 days ago
FPRI BMB Ukraine: KIIS’ survey of Ukraine’s perceptions of parties and politicians
8 days ago