DEATH OF THE USSR: Remembering Moldova's children of the Gulag 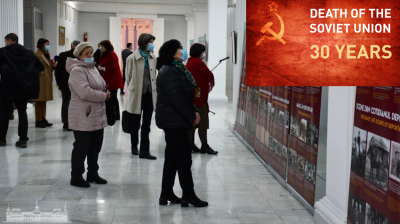 An exhibition at the National Museum of History of Moldova tells the story of the tens of thousands of children deported from the Moldovan Soviet Socialist Republic (SSR) between 1941 and 1951.

Their tragic histories were in stark contrast to the images of happy childhoods portrayed by the Soviet authorities, and those that survived and eventually returned to their home republic bore a lasting stigma from being designated children of ‘enemies of the people’. Now a collection of around 180 photographs, as well as memoirs and archival documents, has been put together to tell their stories.

In the first wave of deportations on June 12-13, 1941, days before the Nazi invasion of the Soviet Union, “children were abusively included in the list of ‘hostile elements condemned to deportation’ in the plan to liquidate potential ‘enemies of the Soviet state’ on the grounds of ‘unhealthy origins’ as a measure for the security and Sovietisation of the western borders of the USSR,” Ludmila Cojocaru, associate professor at the Moldova State University and the curator of the exhibition, tells bne IntelliNews.

Then in 1951 the deportation of members of the Jehovist sect from western parts of the USSR took place. Of the 2,641 deportees from the Moldovan SSR, 839 were children.

The children deported from the Moldovan SSR were sent to various settlements and sorting centres for minors across the Soviet Union, many ending up in orphanages or nurseries for children of ‘enemies of the people’ in remote regions of the vast state such as Kazakhstan or the Russian Far East.

The children were treated harshly. “Bessarabian children sentenced to deportation, famine, Russification, indoctrination and the forced excision from their own families because of the repressive policies of the totalitarian-communist regime,” says Cojocaru.

“Some children died on the way to exile; others were born on the deportee trains. Also, a large number of children died due to the organised famine and harsh conditions in the childcare institutions for the children of ‘enemies of the people’, and some of them were born far from their parents' and grandparents' homeland — in special settlements or places where their mothers were imprisoned.”

Even for those that eventually returned to Moldova, the ordeal wasn’t over. “The return to Moldova, after Stalin's death, of those who survived the Gulag was marked by the stigma of ‘children of the enemy of the people’, which meant social marginalisation, restricted access to education and pressure from political structures,” says Cojocaru.

“This stigma carried the risk of alienation from relatives and their own ethno-cultural values, even if the memories of the victims of the totalitarian-communist regime, the speeches and strategies applied in daily life after returning from deportation, reveal detachments and pronounced fractures in their identity inoculated by the totalitarian Soviet state.”

Even today, most people know relatively little about the child deportees. “The files in the archives of the former Soviet repression structures present brief information, bound by the ideology of ‘happy childhood in the USSR', and the testimonies of the survivors have long been unappreciated,” she says. However, oral history documentation and recent family archive research have made it possible to research their experiences.

The exhibition makes a valuable complement to existing knowledge about adult deportees, given the different experiences of children who were deported.

“Studies show that this age group had its own feelings, attitudes and survival strategies, different from those of adults, in the context of deportations, political repression, organised hunger or trauma caused by the arrest or dispossession of parents,” explains Cojocaru.

It was put together with support from the Development Cooperation and Democracy Promotion Programme of the Lithuanian foreign ministry. There are plans to present the exhibition at museums and public institutions in Moldova, Romania and Germany.

This article is part of a series marking the 30th anniversary of the breakup of the Soviet Union. Read the other stories in the series here:

A green revolution brought the USSR down

Widespread nostalgia but no going back

Strong institutions are better than a strongman leader

BOOK REVIEW — Reassessing the causes of the Soviet demise