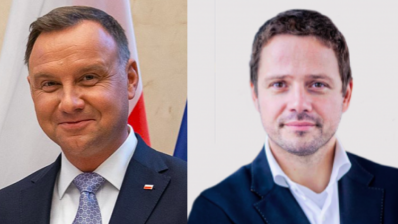 Whoever emerges as the winner of the run-off presidential vote in Poland this Sunday, it will mark the start of several years of new turmoil in the EU’s sixth most populous country.

Backed by the nationalist government led by Law and Justice (PiS), incumbent President Andrzej Duda is facing centre-right mayor of Warsaw Rafal Trzaskowski in what polls are unanimously predicting will be a razor-thin contest. The victor will either help usher Poland further down the authoritarian slide or kick off a gruelling political conflict fuelled by resentment accumulated in the past five years.

The authoritarian threat is the incumbent winning another five years in office, giving the PiS-led administration a virtually free hand in governing Poland until 2023, the year of the next general election.

Fears have long grown in Poland that five more years of Duda will give PiS’ chairman Jaroslaw Kaczynski — the chief decision-maker who holds no official role in the government — an opportunity to cement power and crush the opposition, media and civil society in much the same way as Viktor Orban did in Hungary.

In the final days of the campaign, the ruling camp has made noises along those lines. Earlier this week, Poland’s foreign affairs ministry summoned Germany’s charge d’affairs over coverage of the election by the partially German-owned tabloid Fakt.

“We have to think about the media situation in Poland … and I hope we will draw some conclusions once the campaign is over,” Justice Minister Zbigniew Ziobro said in reaction to Fakt’s cover lambasting Duda for granting a pardon in a paedophilia case.

A triumph for Trzaskowski will most likely end PiS’ authoritarian drive. Instead, it will ignite the fiercest political conflict in Poland since 2010, the year Kaczynski’s twin brother, then-president Lech Kaczynski, died in a fatal plane crash in Smolensk, Russia. That set PiS off on the track of framing then ruling party Civic Platform (PO) — where Trzaskowski is vice-chair — with conspiracy theories in which the Polish government colluded with Russian President Vladimir Putin to kill its own president.

In both scenarios, a big question lurks: will PiS’ subjugating democracy further or Trzaskowski setting the scene for permanent conflict reinvigorate the Left or — perhaps a more likely scenario — further boost the far-right, already a possible kingmaker in Sunday’s contest. Left or right, Poland’s political parties have rarely been anything more than a background to the PiS-PO conflict that has dominated Polish politics since the mid-2000s.

The 1.3mn people who voted for the far-right presidential candidate Krzysztof Bosak in the first round of the election on June 28 are the big unknown on Sunday. A July 9 poll by Ipsos for the independent news outlet Oko Press showed the far-right voters split nearly evenly 42%-41% in Duda’s favour with as many as 17% still undecided.

Both Duda and Trzaskowski keep appealing to the far-right on their campaign trails. Duda is accentuating traditional family values he says are dear to most in the staunchly Catholic Poland. In a campaign stunt, the president submitted a constitutional amendment banning adoption by homosexual couples. That followed weeks of anti-LGBT rhetoric.

Trzaskowski has spoken more about liberal economics that many on the far-right juxtapose with PiS’s inflated social spending. Wary of the importance of the far-right voters, however, Trzaskowski did also say — even if in slightly less discriminating language — he would not back adoption by same-sex couples. That might cost him some votes on the left on Sunday.

Unsurprisingly, Duda has the unwavering support of the government and the public media, the broadcaster TVP in particular. PiS took control over public media during its first term in power in 2015-2019 and has made them a government propaganda tube, not infrequently similar to media from regimes like North Korea.

That has only fuelled further divisions in Poland, to the point at which TVP and its private competitors TVN and Polsat proved unable to agree on a jointly hosted live debate between Duda and Trzaskowski. Not least because Duda — accustomed to servile TVP journalists — refused to face with those capable of criticising him. For his part, Trzaskowski boycotted anything to do with TVP.

The resulting curiosity was Duda and Trzaskowski holding “debates” on their own with the rival’s pulpit ostensibly empty. Duda took part in a controlled event with friendly questions reportedly asked by the local people from the town of Konskie — some of whom turned out to be bussed-in PiS supporters and functionaries. Trzaskowski did better by inviting a host of media — including pro-PiS ones — to ask him questions.

But the debates are unlikely to move the devout voters of either man one inch. The Ipsos poll showed 100% of Duda voters in the first round will vote for him again on Sunday. The ratio for Trzaskowski’s first round supporters is 99%.

It will therefore be the mobilisation of other groups of the electorate that will decide the election’s result. Most voters who backed centrist and centre-right candidates in the first round declare they will vote for Trzaskowski but the Ipsos poll for Oko Press showed they were slightly less determined to go out to the polling stations. In a razor-thin contest, that could prove crucial.

“Duda's voters cannot be sure that they will have their "dream president" for the next five years. But Trzaskowski's voters should not give up but mobilise, [especially if] declarations of Duda's supporters prove exaggerated,” Oko Press’s editor Piotr Pacewicz wrote in a comment.

“The declared mobilisation of Duda’s voters is so big that it appears unlikely to happen,” Pacewicz added, pointing to a chance for Trzaskowski to win.

Chances also are that the exit poll on Sunday night will not point to a winner clearly. In that case, a riveting night — and possibly Monday too — lies ahead with the final outcome shaping up as official results pour in from across Poland. It might also provide premises for opening up a Pandora's box of contesting the election result in the Supreme Court, itself a fierce political battleground between PiS and the opposition. Whatever the outcome, it is not going to be quiet before or after the election storm in Poland this weekend, this year, or anytime later.