The draft law limiting foreign ownership of Russian tech companies to 20% has been soften and now capped at 49%
By bne IntelliNews November 7, 2019

The draft law on limiting foreign investors share of “strategically important” tech companies has been considerable softened with the cap on foreign ownership increased from 20% to 49%, BMB reported on October 7.

The controversial bill was introduced by Duma deputy Anton Gorelkin and mirrors a similar bill that has already been enacted to limit foreign ownership of media outlets to 20%.

When the original draft was presented in October the shares in Russia’s biggest and most valuable tech company Yandex crashed but the backlash against the more stringent version has been substantial as Russia’s tech sector is booming.

Believing passage of the legislation to be inevitable, Russia’s leading business lobby group, the Russian Union of Industrialist and Entrepreneurs (RUIE), has come out in support of the government’s proposed changes to Gorelkin’s draft law.

The compromise has been to increase the cap from 20% to 49%, which given the structure of shareholding in both Yandex and its closest rival Mail.ru means no one will have to sell any shares.

“If the bill only considers voting shares, tech giants Yandex and Mail.ru will not need to alter their ownership structures,” BMB said in a note.

“Judging by Gorelkin’s reaction to the government’s proposal, the Kremlin seems likely to accept this compromise. This will mean temporary relief for Yandex. But don’t expect the Kremlin to give up on its ongoing efforts to bring Yandex to heel.” 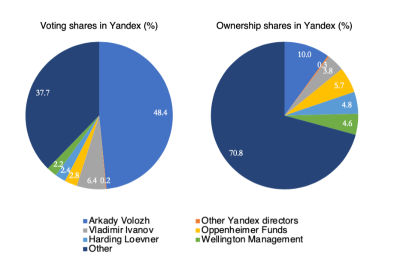 STOLYPIN: Russia’s opportunistic MENA policy: scavenging, not strategising
Famous ex-defence reporter arrested, accused of treason
US intelligence memo admits there is “no evidence” of Russian payment of bounties to Afghans for killing US soldiers

Telco Ucom is seeking to block an attempt by rival Team – set up earlier this year by two of its former executives – to buy Veon Armenia.

e-Sapa app based on tracker for fuel sales developed as industry association says around 40% of alcohol sold in Kazakhstan is counterfeit or illegal.

The Movial office in Iasi will become the fourth technology development centre in the region for Microsoft.