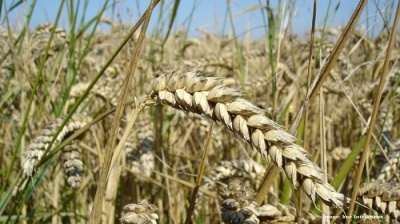 Extreme heat and droughts across several European countries have led to forecasts for this year’s harvests being reduced.

Coming on top of the disruption to global grain markets caused by the war in Ukraine – the war disrupted the spring sowing season and Ukrainian Black Sea ports have been blockaded by Russia – this adds to fears of shortages in import-dependent countries and is expected to further push up prices.

The July 2022 edition of the JRC MARS Bulletin published by the EU’s Joint Research Centre said its yield outlook for EU summer crops has been “substantially reduced”, citing the “hot and/or dry weather conditions in large parts of Europe”.

This includes the crops in some eastern EU members, specifically northern Romania, eastern Hungary and western and southern Ukraine, which have suffered from drought and very high temperatures with a “strong negative impact” on summer crops. 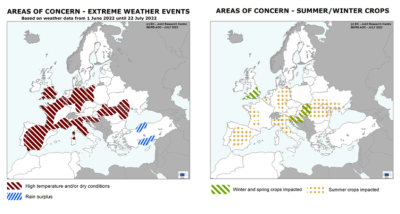 Romanian farmers, meanwhile, estimated that the country’s wheat crop will drop this year by 25% year on year to 9mn tonnes as a result of the drought, as reported by Ziarul Financiar. Romania is typically responsible for around 10% of the EU’s wheat output and a quarter of its exports.

Croatia, Slovenia and eastern Slovakia also experienced precipitation deficits, which together with the heatwaves in July shortened the grain filling of winter crops and spring barley, with negative impacts on expected yields.

Other problem areas were parts of Spain, southern France, central and northern Italy – all affected by a long drought – and central Germany. More recently, large parts of Czechia have been ravaged by wildfires.

On the other hand, the JRC reported particularly favourable conditions in the Baltic Sea region as well as Ireland and Scandinavia.

The lower-than-expected sunflower production is an additional problem, as again, Ukraine is a major producer. Some states had already introduced curbs on exports of sunflower oil following the invasion.

The Russian invasion of Ukraine in February immediately sent grain prices soaring, adding to already rising inflation as the global economy recovered from the coronacrisis.

Both Russia and Ukraine are among the world’s top exporters of grain. Ukraine’s grain exports have been severely disrupted despite efforts by neighbours Poland, Romania and a number of other countries to help it get grain to international markets by opening up their ports and building new infrastructure.

On top of this, there is the threat – not carried out so far – that Russia could decide to restrict its exports to punish Western countries for their sanctions.

The deal was signed in Istanbul after lengthy talks between Russia, Ukraine, Turkey and the UN, and will unblock up to 25mn tonnes of grain trapped in Ukraine since the start of the war by a Russian Black Sea naval blockade.

With all three ports open, Ukraine is expected to transport up to 3mn tonnes of grain per month, resuming exports to the same countries as prior to the Russian invasion. Many of Ukraine’s major importers are developing countries which have been hit hard by the global food crisis caused by skyrocketing grain prices, including Lebanon, Egypt and Tunisia.

Ukraine typically exports some 6mn tonnes of wheat a month during the high season, which is about to begin, but this year exports have fallen to around 1mn tonnes a month as Ukraine’s ports have been closed and it has been forced to export grain via truck and rail, which has insufficient capacity to cope with the volumes of grain wanting to leave.

As reported by bne IntelliNews, future prices have fallen in recent weeks as the talks progressed on resuming exports from Ukraine’s ports, locked up by a Russian Black Sea naval blockade. The prices of wheat futures dropped by 6% on July 21 to their lowest level since the start of the war as it became increasingly clear that a deal was imminent.

However, the day after the deal was signed, Russia launched a missile attack on the Ukrainian port of Odesa, causing wheat prices to spike.

On a more positive note, Kazakhstan, another of emerging Europe’s major grain producers, now expects to produce 13mn-13.5mn tonnes of wheat this year, as announced by Agriculture Minister Yerlan Karashukeyev on July 26. That would be an increase of 15-20% compared to 2021. Kazakhstan’s top wheat export markets are Uzbekistan, Afghanistan and Iran.

Serbia also said in June that it expects to produce 3mn tonnes of wheat this year, which is twice as much as the country needs, Deputy Prime Minister and Agriculture Minister Branislav Nedimovic said on June 19. Nedimovic noted that Serbia produces 2 to 2.5 times more wheat than it needs and that this production is sufficient for the entire Balkan region, according to the statement.

Russian President Vladimir Putin is reported to have agreed to permit exports to leave due to pressure on him by “friendly” nations in Middle East and North Africa (MENA), where governments fear social unrest caused by the looming food crisis. Memories of the price hikes that precipitated the Arab Spring more than a decade ago are still strong.

This comes on top of a contraction in agricultural output in Morocco due to severe drought. This is likely to compound restraints on growth, ratings agency Fitch said, slowing the rise in GDP from 7.5% in 2021 to just 2% in the current year. Morocco has responded by increasing its grain stockpiles, while also turning to other suppliers such as Brazil.

Several Southeast European states, which also rely on grain imports, slapped restrictions on exports earlier this year. Rising food and fuel prices led to several protests in Albania. In North Macedonia, the record-high food prices and shortages of cooking oil, wheat and flour forced the government to consider restructuring their farm policy with the aim of boosting domestic food production.