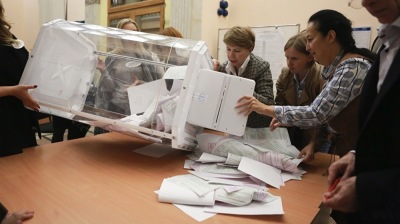 With 90% of the votes counted the ruling United Russia Party has taken a constitutional majority of 315 seats, down from the 343 it held in the previous election.
By bne IntelliNews September 20, 2021

As the final results from the weekend’s Duma election come in, the ruling United Russia Party has delivered several surprise results and retaken its constitutional majority with 49.65% of the vote, with 90% of the votes counted.

The result gives United Russia 315 seats in the 450-strong Duma and more than the 300 seats it needs to be able to change the constitution at will, but down from the 343 seats it held in the outgoing Duma.

The almost final result has already sparked cries of foul as United Russia snatched victory from the jaws of defeat, overturning several results where the party seemed to have lost badly.

In Moscow in particular, a bastion of liberal opposition voting where United Russia polls especially badly, it was earlier reported that United Russia had lost all 15 seats, mostly to Communist Party of the Russian Federation (KPRF) based on a tally of the paper ballots.

However, once the electronic votes were counted – electronic voting is being used for the first time in seven districts, which pundits says is almost impossible to scrutinise – support for United Russia surged enough to allow the party to claim victory in all of the capital’s seats.

There were big changes in the share of seats amongst the other parties. The biggest victor in these elections was the Communist Party of the Russian Federation (KPRF), which saw its standing in the Duma dramatically improve.

As of 11am on September 20 the Central Election Commission (CEC) reported with 90% of the protocols counted the following results:

As bne IntelliNews reported, the KPRF have been the main beneficiary of the jailed anti-corruption activist and opposition politician Alexei Navalny’s smart voting, and its better than expected result can be attributed to the success of the campaign, despite the Kremlin’s largely successful efforts to prevent the list of candidates to support being published on the internet, just under two thirds of which were from the KPRF. Nevertheless, questions have been raised over this result too, as early exit polls showed that the Communists had won as much as 25% of the vote, before the electronic results were included in the tally.

The main loser from the elections was the LDPR, led by firebrand Vladimir Zhirnovsky, and saw its share of the vote almost halved. Most of these lost votes went to the New People, a party associated with the presidential administration that was set up a year ago and designed to capture votes from the liberal protest end of the spectrum. New People scraped across the 5% threshold to enter the Duma as the first new party to do so since 2003, when Rodina was elected, but later transformed into Just Russia (aka Fair Russia), which re-entered the Duma in these elections with more or less the same number of seats.

United Russia’s projected 315 seats in the new Duma will raise eyebrows as the results strongly suggest that the authorities have introduced a large number of fake votes into the system. Videos posted on social media showed many cases of blatant ballot stuffing in many of the districts.

As bne IntelliNews reported in “Russia’s hybrid Duma elections”, the Kremlin is caught on the horns of a dilemma: on the one hand it needs to win as many genuine votes as possible or face the prospect of mass demonstrations; and on the other, it cannot win enough votes for United Russia to take a constitutional majority and so has to cheat. The problem is how far the Kremlin can push the cheating to get its party into power before the population rebels. The experience of Belarus' President Alexander Lukashenko's blatant falsification in the August 9 presidential election last summer, where protests broke out only hours after polls closed, is a poignant reminder of what is at stake.

Russians are much less likely to protest, according to recent polls, as they have far more to lose from the economic dislocation that comes with a colour revolution, but at the same time the Kremlin has raised the stakes of public protests by ratcheting up the repression to unprecedented levels not seen since the days of the Soviet Union. Blatantly fixing the vote in Moscow is particularly dangerous, as Muscovites are the most likely to protest of any of Russia’s urban residents.

The Kremlin went into this election with the plan for United Russia to win at least 45% of the vote on a 45% turnout.

Although the final count is not in yet, it appears that the United Russia won 49.5% of the partly list votes that account for 225 seats in total.

Most of the protest candidates listed on Team Navalny’s smart voting list did not enter the Duma – one of the Kremlin’s key goals in this election according to many pundits. The party lists have given United Russia a total of 120 seats, while in the single-mandate constituencies it won 195 seats out of a total of 225 available.

The United Russia party list was headed by the popular Russian Foreign Minister Sergei Lavrov and Russian Defence Minister Sergei Shoigu, both of which Interfax reports have already refused to take up their parliamentary seats, passing them on to colleagues.

Even if United Russia continues to dominate the Duma, the KPRF has increased its number of seats to 65 from 42, but that is not enough to allow it to do more than lobby for change. The New People Party will likely have 12 seats.