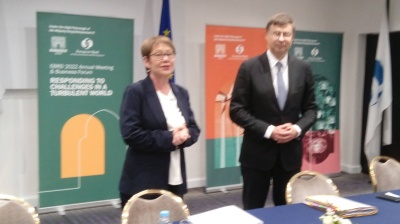 EBRD President Odile Renaud-Basso and European Trade Commissioner Valdis Dombrovskis at the EBRD annual meeting in Marrakesh.
By Clare Nuttall in Marrakesh May 11, 2022

European Trade Commissioner Valdis Dombrovskis said on May 10 he is hopeful that EU member states will agree on a ban on Russian oil imports that would strike at the “heart of the Kremlin war machine financing”.

“The work on the sixth sanctions package continues,” Dombrovskis told journalists at the European Bank for Reconstruction and Development (EBRD) annual meeting in Marrakesh.

“If you look at pre-war trade between Russia and the EU, 62% is hydrocarbons, meaning gas, oil and coal. Coal is a relatively small part and we already banned Russian coal imports in the EU, so by putting sanctions on hydrocarbons we are really getting to the heart of the Kremlin war machine financing. That’s why it’s so important this decision is taken.”

Commenting on the progress towards adopting additional sanctions, Dombrovskis pointed out that previous packages were also not adopted immediately due to differences among member states.

“[A]t the end of the day all member states were able to agree [on previous sanctions packages] and we hope that’s going to be the case now, because it’s important that the EU and broader international community responds forcefully to Russia’s brutal invasion and puts maximum pressure on Russia to stop the war,” he said following a meeting with EBRD President Odile Renaud-Basso.

European politicians have met several times in recent days to discuss the latest package of sanctions on Russia. Bulgaria, the Czech Republic, Hungary and Slovakia have all expressed concern over the plans for a fast phase-out of Russian oil.

Dombrovskis also said that the EU is looking at ways to give more support to the EBRD’s efforts to help Ukraine and other countries affected by the war, including through guarantees.

The EBRD’s current focus in Ukraine is on projects to keep the economy afloat, including through support for food and energy security, Renaud-Basso told journalists.

Dombrovskis estimated that the cost of war damage to Ukraine amounts to around €500bn-600bn.

The EBRD recently announced it has already put together a €2bn economic resilience package to help Ukraine and neighbouring countries affected by the Russian invasion, and more will come as the main effort at rebuilding starts.