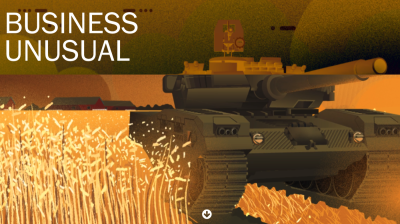 The EBRD extended a record €13bn of loans in 2022, with Ukraine becoming its biggest country of operation. The cover to its transition report last year featured a tank in a wheat field. / bne IntelliNews
By bne IntelliNews January 15, 2023

The European Bank for Reconstruction and Development (EBRD) invested a record €13.1bn into its Emerging Europe and Eurasia region in 2022, the bank announced on January 12, reports Reuters.

Investments were up from €10.4bn in 2021, beating the previous record of €11bn in 2020, when the development bank rushed out loans to its member states to counter the effects of the coronavirus (COVID-19).

Russia used to be the biggest recipient of EBRD credits, but the bank ceased all new business there after the 2014 annexation of Crimea and is currently winding down what positions are left in the country.

Ukraine has become the biggest client state and received €1.7bn in 2022. Despite a war still raging in the country, the EBRD has already restarted operations in the country and is supporting it with investments into infrastructure, energy and food security and credits for the private sector.

The EBRD plans to double investments into Ukraine to €3bn this year as urgent reconstruction work is already underway.

"We exceeded our greatest expectations despite the tragedy of the war on Ukraine and the regional and global crises it has brought in its wake," EBRD President Odile Renaud-Basso said in the statement, as cited by Reuters.

As reported by bne IntelliNews, the EBRD said at its annual general meeting in Marrakech this year that it was “living in a time of turbulence” as the effects of the war in Ukraine spill out to affect all the countries in its region, making its work more relevant than ever.

The EBRD has switched its focus and is pouring help into Ukraine as it struggles to cope during the war with Russia, but thought is already turning to the eventual reconstruction of the country when peace finally returns, Renaud-Basso said at a press conference on the last day of its annual meeting on May 12.

“We are meeting of course as the world was trying to recover from the COVID pandemic and the world is now confronted with the war in Ukraine, which alongside major loss of life, major destruction, is bringing additional and fresh economic strain, threatening energy and food security,” Renaud-Basso said. “There will be some impact from this war beyond the immediate region to all our countries of operation… The EBRD will use all of its resources to support all these countries.”

The EBRD said that the share of green economy financing reached 50% of total business volume, compared with 51% in 2021, meeting the lender's target to make at least half its financing green by 2025 for the second year in a row.