EBRD predicts Ukraine’s economic recovery will gather momentum to 3.5% growth this year and next 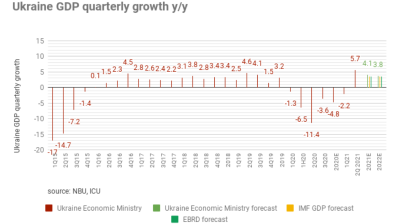 EBRD predicts Ukraine’s economic recovery will gather momentum to 3.5% growth this year and next.
By bne IntelliNews November 4, 2021

Ukraine’s economic recovery is likely to gain momentum over the remainder of 2021, the European Bank for Reconstruction and Development (EBRD) says in its latest Regional Economic Prospects (REP) report, published on November 4.

The development bank forecasts the country’s growth to increase to 3.5% year on year in both 2021 and 2022. Growth in 2021 will be fuelled by “a rich grain harvest and the continued normalisation of business activities, though slow progress on reform and rollout of the COVID-19 vaccination remain major risks to the forecast,” the EBRD said in a press release.

Ukraine’s economy is recovering from the shock of the break out of the epidemic and declined by 2.2% y/y in the first quarter of last year, before making a strong recovery of 5.7% in the second quarter.

Double-digit growth in household consumption and investment drove growth that was exaggerated on low base effects and the recovery was underpinned by strongly rising prices for major export products such as cereals and iron.

Improved terms of trade also helped to maintain a positive current account, which put some extra money in the government’s pocket and increased the supply of foreign currency, although it also sent the value of the local currency, the hryvnia, up as well.

The main headache remains rapidly accelerating inflation, which has ballooned in 2021 to 11% as of September, fuelled by rising food and energy prices.

“The EBRD is raising its broader economic growth forecast for the regions in which it invests to 5.5% for 2021. While this is an upward revision of 1.3 percentage points from its June forecast, after a strong performance in the first half of the year, the bank warns that serious threats abound,” the EBRD said.

“High commodity and energy prices, tight labour markets, supply-chain disruptions and currency depreciation in some EBRD investee economies had begun to push up inflation even before the latest spike in COVID-19 infection cases,” the bank added.