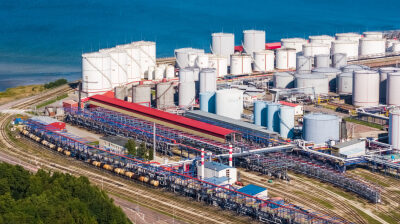 The Porto Franco project is in the centre of Tallinn close to the port.
By bne IntelliNews January 13, 2021

The European Bank for Reconstruction and Development (EBRD) said on January 13 that it no longer has ties to the real estate project Porto Franco, which this week was at the centre of a corruption case that brought down the Estonian government. The EBRD said the €63mn loan was never disbursed and the agreement expired already in 2020.

As reported by bne Intellinews, Estonia's chief state prosecutor announced on January 12 that he is investigating allegations of corruption against two of the ruling parties’ top officials involving government loans given to Tallinn's controversial Porto Franco real estate development project in return for party donations.

"The EBRD would like to put on the record that our loan for the Porto Franco project was never disbursed and the agreement has now expired. Consequently, the EBRD is not involved in the project anymore," said Axel Reiserer, the head of press at the EBRD.

Reiserer specified that the EBRD did not abandon the loan due to the recently emerged corruption case, but the contract expired already at the end of the third quarter of 2020.

With a loan agreement signed on Feb. 28 last year, the EBRD was supposed to provide up to €63mn and Luminor up to €39mn for the Porto Franco integrated retail, office and hotel project in Tallinn that is a key component of the wider regeneration of the port district.

Last summer, the government decided to support the Porto Franco project from the Kredex measure with a working capital loan of €39.4mn. The loan was granted for a term of up to six years, with an interest rate of 12 months Euribor plus 2% per annum.

The total cost of the development of Porto Franco is approximately €200mn.

In the morning of April 22 it looked like Russia was revving up to start WWIII by invading Ukraine. By the end of the day Russian President Vladimir Putin was holding out the hand of co-operation in a global effort to beat the Climate Crisis.

Putin holds out a hand of co-operation at the online climate summit with Biden
13 minutes ago
#BREAKING: Russia withdraws troops from Ukraine’s border
16 hours ago
Navalny rally disappoints on a low turnout
1 day ago
Czechs give ultimatum to Russia to let expelled diplomats return to Moscow
1 day ago
Outrage in Armenia as Azerbaijan’s Aliyev threatens force to secure land corridor
1 day ago