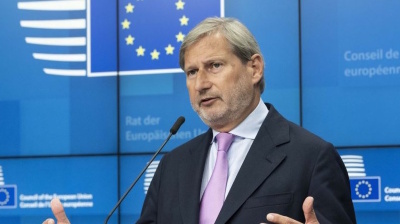 Johannes Hahn, the Commissioner for Budget and Administration, announces the decision of the EC in the conditionality mechanism against Hungary. / bne IntelliNews
By Tamas Csonka in Budapest September 19, 2022

The European Commission has proposed to the European Council a suspension of 65% of three cohesion funds due to Hungary, amounting to an estimated €7.5bn. The council will now have one month to approve the Commission's proposals with a qualified majority, which can be extended by a further two months under special circumstances.

If Hungary fails to adopt relevant legislation it could lose two-thirds of funds from the Operational Programmes for Environment, Transport and Rural Development.

The amount in question amounts to 5% of the country's estimated 2022 GDP and a third of the funds the country is eligible for under the 2021-2027 budget.

Hungary could become the first EU country to lose significant EU funds under the bloc's new Conditionality Mechanism if it fails to implement reform measures to prevent and detect systemic fraud and abuse. Viktor Orban's regime is currently struggling to keep its budget deficit under control, and the hold-up in the payment of EU funds has caused the forint to plunge.

However, Hungary believes it can secure the frozen funds by the end of the year by pushing through what critics allege are superficial reforms to its deeply flawed procurement process and a stepping up of prosecutors' investigations of the country's rampant corruption, which has up to now failed to prosecute offenders close to the ruling radical rightwing regime.

The European Council must decide on dropping financial sanctions or imposing them by December 18 at the latest, by a qualified majority, which means that 15 of the 27 countries must support the decision, and the 15 must represent at least 65% of the total EU population.

Johannes Hahn, the Commissioner for Budget and Administration, informed reporters on the decision of the European Commission’s assessment of Hungary's reply to allay the concerns of the EU’s executive body on corruption at a Sunday press briefing.

"It's about breaches of the rule of law compromising the use and management of EU funds," Hahn said, adding that so far "we cannot conclude that the EU budget is sufficiently protected".

Hahn said Hungary's latest promise to address EU criticisms in 17 areas was a significant step in the right direction, but must still be translated into new laws and practical actions.

Replying to a question, the commissioner said the conditionality mechanism could be relaunched if Hungary fails to implement its commitments.

The rule of law conditionality mechanism was triggered just after the fourth consecutive supermajority of the ruling Fidesz party in early April after the EU courts turned down the legal challenges posed by Poland and Hungary.

The EU and Hungary have been at odds over the systematic irregularities in public procurement laws, shortcomings in other anti-graft measures and weaknesses in effective prosecution.

Budapest has made a string of pledges over the last two months, which includes the establishment of an anti-fraud "integrity authority" to oversee public procurement procedures using EU funds. Its head will be chosen by independent experts through an open application process. The authority could begin its work in the second half of November.

Hungary has also promised to set up an anti-corruption working group that will be independent of the government and will be tied to the integrity authority, Hahn said.

The government will further strengthen anti-corruption systems, he said, noting changes to be made to the asset declaration system.

Hungary's commitments, he noted, also include ensuring a legal remedy against the prosecutor's decisions in corruption cases.

Tibor Navracsics, the minister in charge of the uptake of European Union funds, on Sunday welcomed as "progress" the European Commission's decision on EU funds allocated to Hungary, saying it would allow for a swift conclusion of the talks on the  cohesion monies and post-pandemic Recovery and Resilience Fund (RRF) payments, which are also frozen.

Navvacsics told a press conference that the government was hopeful that negotiations could be concluded by the end of the year.

Because the government intends to fulfill the commitments it made during the procedure regarding the conditionality mechanism linking EU funding to the rule of law, the sanctions proposed by the Commission "are of secondary importance", as "their approval cannot happen", Navracsics said.

He said that the government will submit the related legislative proposals to parliament on Monday and Friday.

The EC’s announcement on Sunday means that in the best-case scenario Hungary can wind up talks on cohesion funds and the RRF before the end of the year, which means the first transfers could be made in early 2023, financial website Portfolio.hu commented.