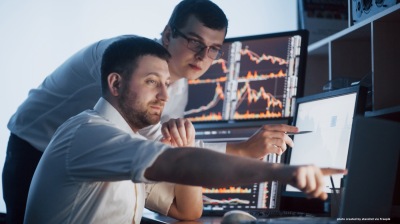 Emerging markets saw a net outflow of $10bn in March as the war in Ukraine clouds the picture for investors around the world. / wiki
By bne IntelliNews April 6, 2022

The Institute of International Finance (IIF) estimates that emerging markets (EM) securities suffered a net outflow of $9.8bn in March 2022 – the first outflow month since March 2021, as the global investment community goes “risk on” thanks to the war in Ukraine.

“Foreign investment in emerging market stocks and bonds has suffered throughout the first quarter of the year. We see investors with higher risk sensitivity as anxiety builds over geopolitical events, tighter monetary conditions, rising inflation and fears that many economies will not recover quickly enough from the pandemic. Overall, the first quarter of the year has seen investors being more selective,” said IIF economist Jonathan Fortun in a note on April 5.

Russia’s attack on Ukraine on February 24 has unsettled investors due the widespread repercussions that will result from sanctioning a major commodity producer that is deeply integrated into the global economy. Commodity prices have already spiked and the threats to cut Europe off from its supplies of Russian gas could throw major economies like Germany into recession with unforeseeable consequences.

The uncertainties have even affected the outlook on countries like China, which has also suffered from a bout of selling.

“One constant through all the ups and downs in capital flows dynamics of recent years has been China, which saw steady inflows as foreign investors built their exposure, even through China-specific shocks like US tariffs and the early stages of COVID,” said Fortun. “However, this month, our tracker shows an important outflow episode hitting China the hardest, this is an unprecedented dynamic that suggests a market rotation.”

Fortun argues that capital flows into China have been stable in recent years as foreign investors had little exposure in contrast to their exposure to other emerging markets. Nevertheless, this month the IIF capital flow tracker showed an outflow from both China bonds of $11.2bn and from equities of $6.3bn. Non-China EM debt attracted $8.2bn, while EM equity markets, excluding China, showed marginal outflows of $400mn.

“While it is premature to draw any definitive conclusions, the timing of China outflows suggests foreign investors may be re-evaluating their exposure and a rotation in preferences could start to take form,” Fortun speculated.

IIF says it believes the markets will remain volatile until the Ukraine war is over and there is more clarity on the Russian sanctions regime and its consequences for the global economies. Some countries have already reached bottom, says Fortun, and could potentially benefit from higher commodity prices, but may also be greatly exposed to risk factors. 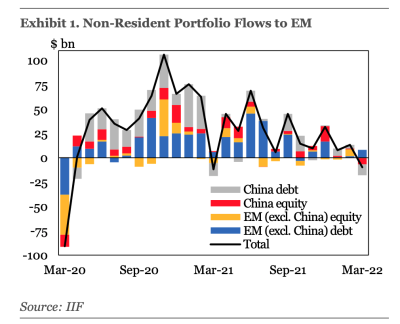 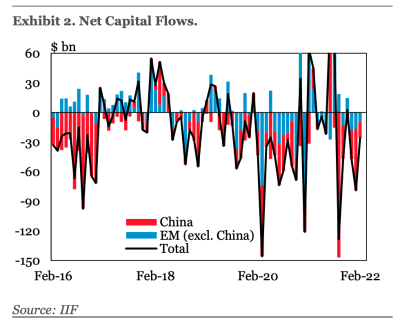 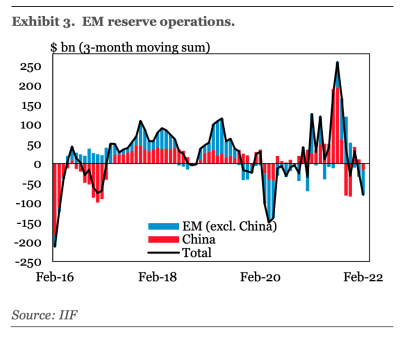