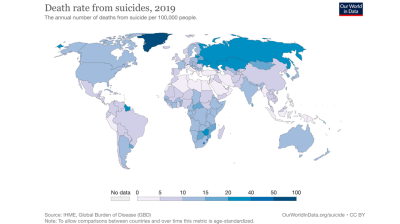 There is a cluster of countries in the former Soviet Union that have some of the highest suicide rates in the world.

Kazakhstan, Lithuania, Russia and Ukraine all had more than 20 deaths from suicide per 100,000 of their populations as of 2019, according to a compilation of data from Our World in Data.

Even before Russia’s invasion in February 2022, Ukraine had the highest level of deaths from suicide in the Emerging Europe region, at 26.34 per 100,000 inhabitants. This compares with just nine suicides people per 100,000 people globally.

Kazakhstan also had the highest number of suicides as a share of total deaths across emerging Europe in 2019 at 3.06%, one of the highest percentages worldwide.

The four states all have some things in common, chief among them being they are all part of the former Soviet Union, and men account for the overwhelming majority of suicides.

This dates back to the turbulent early transition years, when suicide rates peaked in many countries in the region as economies collapsed and whole industries disappeared virtually overnight.

That era more generally had a devastating impact on demographics in the region, contributing to the projected long-term population decline by the end of this century. Despite efforts to raise birth rates, populations of almost all Emerging Europe countries (with a few exceptions, notably Tajikistan) are forecast to fall.

More recently, the isolation during lockdowns and school closures to contain the coronavirus (COVID-19) pandemic took a toll on mental health, especially among young people.

However, there are also significant differences. Lithuania, along with the other Baltic states, broke away decisively from the other post-Soviet states early on in the transition period. It is now an EU and Nato member.

Three of the states are majority Christian while one – Kazakhstan – is majority Muslim, though with sizeable religious minorities.

War and suicide in Ukraine

The data were compiled three years before the Russian invasion in February 2022, but for nearly eight years before that fighting has been ongoing in the eastern part of the country.

Ever since the Russia-backed self-declared Donetsk and Luhansk republics tried to break away from Kyiv’s control suicides have been reported among soldiers deployed in the region.

While the numbers are unclear, Deputy Minister for Veterans' Affairs Inna Drahanchuk told the BBC that the ministry’s records showed about 700 veterans had died by committing suicide between 2014 and 2018. However, she acknowledged that it was not always clear exactly how someone had died.

The higher suicide rates are not only among combatants in the region. According to a 2021 Kyiv Post report, suicide numbers are around four to five times higher in the oblasts bordering the occupied war zone than in the cities of Kyiv and Lviv. “This may be a combined effect of the psychological cost of war, a larger proportion of locals serving in Ukraine’s defence, and lower access to suitable services,” according to the Kyiv Post.

Now that Russia has launched a full-scale invasion of Ukraine, the toll on the mental health of Ukrainians is expected to be much worse. As well as those directly involved in the fighting, millions have fled the country, whose population is never expected to recover to pre-war levels.

One NGO in Poland, which has accepted more than a million refugees from neighbouring Ukraine since the war began, warned of mental health as a “forgotten problem” of Ukraine.

“In 2017, WHO estimated that depression affects 2,800,000 people in Ukraine. Our eastern neighbours also suffer from a very high suicide rate … The war will aggravate these problems: according to forecasts, even another 4mn Ukrainian women will face mental problems,” the NGO warned.

Lithuania, which has the highest number of suicides per capita after Ukraine in emerging Europe, has had a very different post-Soviet history, especially in 18 years since it joined both the EU and Nato back in 2004.

Still, it faces a similarly high level of suicides, which is especially prevalent among men from rural parts of the country.

“One of the most striking global suicide hotspots has been identified in the countries of the former USSR, including in the three Baltic states, Russia, Belarus and Ukraine … Among those countries, Lithuania represents the most extreme case, as it has one of the highest male suicide rates in the world,” says academic report looking at why Lithuania’s suicide rate is so much higher than those of the other eastern EU members.

Looking at why suicide is disproportionately high among rural males, the researchers noted that rural communities suffered more from Soviet-regime repressions, which were followed by radical rural reforms in the 1990s that coincided with a severe economic crisis and a spike in suicides.

It assesses that rural men are the least likely to be able to escape unhappy situations by relocating, and the gender imbalance in rural areas, which have a higher male than female population, mean many are unable to marry. On top of that is the masculinity culture and problems with alcoholism.

In Russia, the high suicide rate stems from similar issues, albeit on a much larger scale. The suicide rate in Russia peaked back in 1994 when 42.1 people in every 100,000 committed suicide, but it remains high by worldwide standards.

A study looks at suicidality among men in Russia over a 20-year period says the country is “still going through one of the most significant historical changes in the last 100 years … Unemployment, low socioeconomic status, underdiagnosed and/or untreated mental illness, and substance abuse are major risk factors for suicide in Russian men. Cultural influences also make suicidal behaviour socially scripted in Russia.”

Temyr Hagurov, a researcher at the Russian Academy of Sciences’ Institute of Sociology, told the Moscow Times that a lack of economic prospects along with “cultural and spiritual emptiness” were critical factors.

As in Lithuania, suicide is more of a rural problem than an urban one. The issues of social deprivation, economic depression, unemployment and heavy alcohol consumption are all worse in rural areas. Men also get more likely to commit suicide as they get older, with numbers peaking at 50.

At the same time, suicides among younger people are increasing. Roman Chuprikov, an adviser to Russia’s top official for children’s rights, told RFE recently that suicides among minors have shot up by 40% since 2020.

Children bought up in orphanages or other institutions – a startlingly high one in 70 according to RFE – are particularly at risk. A 2014 report from Human Rights Watch documented abuse and neglect by staff in institutions.

Poor official handling of domestic violence and child abuse mean these are prevalent in Russia, adding to the pressure on children.

Kazakhstan stands out as the only majority Muslim nation in Emerging Europe with a high suicide rate.

Four academics explored the cultural risk factors behind suicidal behaviour among adolescents in Kazakhstan in a 2020 study, finding that the conflict between traditional Kazakh culture and Western influences added to pressure on young people.

“Economic and cultural shock and breaking the collectivist model” is listed as the first reason for the high suicide rate among young people, as “Kazakh culture, being traditional, has a collectivist orientation in which the family unit and origins play an important role … Powerful distance, collectivism and avoidance of uncertainty characterise the behaviour of Kazakhstanis who traditionally rely on the help of the state and the extended family.”

This was tragically illustrated in one high-profile case in 2021, when one young student at a prestigious academy in Kazakhstan killed himself after a costume party, allegedly following a stern reprimand from an administrator.

Other factors are child abuse, violence and neglect, and more specifically violence against women and girls.

PM’s attempt to quell Mongolia’s ‘coal mafia’ protests drowned out by livid crowds
11 hours ago
Italian PM Meloni outlines new ambitious plan for Africa
13 hours ago
Is Russia putting additional pressure on Belarus to join the war?
23 hours ago
Can Russia sneak gas into the EU via a Turkish gas hub?
1 day ago
Roddy Scott Foundation providing education to the children of war-torn Pankisi Gorge
1 day ago