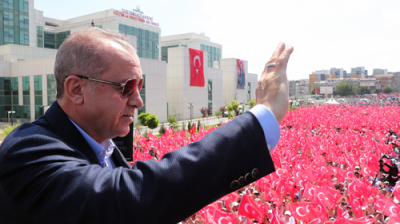 Erdogan addressed the crowd in Istanbul's working class Sultangazi district from the top of a bus.
By bne IntelliNews June 18, 2019

Turkish President Recep Tayyip Erdogan on June 18 came roaring back into the Istanbul mayoral revote campaign having lately maintained a curious distance from the controversial contest.

Erdogan attacked Istanbul’s ousted mayor Ekrem Imamoglu, days before the crucial June 23 re-run of the annulled late-March municipal poll, accusing him of being aligned with the US-based cleric, Fethullah Gulen, blamed by Ankara for orchestrating the failed coup of July 2016.

“Where does he stand? He is with the [cleric’s] Gulenists,” Reuters reported Erdogan as saying while he addressed a crowd from the top of a bus in the working class Istanbul district of Sultangazi.

Populist Erdogan cited apparent tweets sent by Imamoglu on the day of the coup, but offered no other evidence. It was not immediately clear which tweets Erdogan was alluding to.

Big embarrassment
Imamoglu, from the main opposition Republican People’s Party (CHP), narrowly beat the candidate of Erdogan’s Justice and Development Party (AKP) in the original contest, causing a big embarrassment for Erdogan who in 17 years at the top became seen as near-invincible having never lost a major election. The AKP also lost Ankara and several other municipalities. After AKP appeals, the election commission annulled the Istanbul result, pointing to alleged polling station “irregularities” and ordered the re-run.

In what could be a crucial development ahead of the vote, on the evening of June 17 it was reported by Bloomberg that Imamoglu has won the backing of Kurdish politician Selahattin Demirtas, the former leader of the pro-Kurd Peoples’ Democratic party (HDP). Demirtas reportedly called on Istanbul residents to support Imamoglu instead of voting for “enmity—deepening social polarisation further—or for revenge, hatred or grudges.” Writing on Twitter from a high security prison in Turkey’s western Edirne province, Demirtas said he believed “Mr. Imamoglu’s statements should be supported.”

The outcome of the mayoral contest may hang on how the Kurds vote on June 23. Kurds played a key role in the March local elections after Demirtas urged HDP voters in the country’s west to cast their ballots “strategically” to punish the ruling party and its ulta-nationalist ally. Around 300,000 Kurds known to be supporting the AKP in Istanbul largely stayed away from the ballot box in the elections, according to HDP lawmaker Imam Tascier. More than 2mn Kurdish voters are thought to be living in Istanbul, and about 1.3mn of them back the HDP, he said.

Test of democratic credentials
The international community and financial markets will see the conduct of the revote as a test of Turkey’s democratic credentials under Erdogan, who has increasingly taken the role of strongman in recent years, approving of crackdowns that have led to tens of thousands of arrests of alleged Gulenists.

Prior to Imamoglu’s victory, the AKP and predecessor Islamic-rooted parties ruled Istanbul, Turkey’s business and cultural capital, for more than 25 years.

Imamoglu has denied any links with any Gulenist group. In one tweet posted on July 16, 2016, he said Turkey should overcome the attempted putsch by pursuing democracy and peace.

A spokeswoman for Imamoglu was not immediately available on Tuesday for comment.

Some commentators noted that Erdogan made his intervention in the campaign after Demirtas’ call for a Kurdish vote in favour of the opposition and following a televised debate on June 16 between Imamoglu and the AKP’s mayoral candidate, Binali Yildirim, a former prime minister and close ally of the president.

In a poll of more than 30,000 city residents on the morning of June 17 after the TV debate, polling firm Mak Danismanlik found that 46% of respondents said Imamoglu was more successful than his rival, versus 44% for Yildirim. The CHP candidate was likely to get the votes of 65% of those who shied away from the ballot box in March, it found.

“Imamoglu talked more about what he would do, while Yildirim focused more on what he had already done. Usually, those who offer a future projection tend to do better in elections,” Mehmet Ali Kulat, owner of Mak Danismanlik, told Reuters.

The press in Turkey is massively pro-Erdogan. One columnist of a newspaper that backs the president to the hilt said Yildirim’s performance in the debate was superior and a hashtag spread on Twitter—translated as “lightning strikes”—suggested he made a mark.

Yildirim officially narrowly lost the March poll by just 13,000 votes in the city of around 15mn.