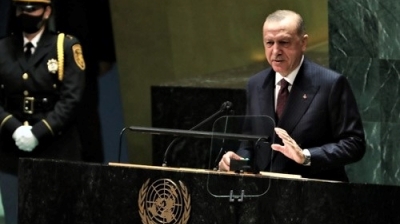 Turkey’s President Recep Tayyip Erdogan clearly came away from his trip to the US last week unhappy at how he was treated by the Biden administration for he was quick to play the S-400 missiles card in an interview aired by CBS on September 26.

Erdogan, who was not given the opportunity of a face-to-face with US President Joe Biden during his time in New York for the UN General Assembly meetings but will be meeting Russian President Vladimir Putin in Russia on September 29, told Face the Nation with Margaret Brennan on CBS News that Turkey still intended to buy a second batch of S-400 missile defence systems from Moscow.

Such a move would deepen Turkey's rift with the US and Nato, which say that the S-400s pose a security threat to the performance data of its F-35 stealth fighter jets and to Nato’s broader defence systems. Following its acquisition of a first batch of S-400s, Turkey was barred from receiving any of the fifth generation F-35s that it ordered, something that rankles with Ankara, with its air force in danger of falling behind those of rivals such as Greece. Turkey has claimed it was unable to procure air defence systems from any Nato ally on satisfactory terms, thus it bought the S-400s. Pentagon officials have disputed the suggestion that nothing competitive was on offer.

"In the future, nobody will be able to interfere in terms of what kind of defence systems we acquire, from which country at what level," Erdogan said in the interview. "Nobody can interfere with that. We are the only ones to make such decisions."

Erdogan also said that Biden never raised the issue of Turkey's human rights track record during their June meeting on the sidelines of a Nato summit in Brussels. He remarked: "No he didn't [bring up the issue]. And because we don't have any problems of that nature in terms of freedoms, Turkey is incomparably free."

Turkey is among the top jailers of journalists, according to figures from the Committee to Protect Journalists (CPJ), while Human Rights Watch (HRW) says Erdogan has consolidated his authoritarian rule with legislation contravening international human rights obligations. Ankara is also regularly accused by European politicians of ignoring rulings from the European Court of Human Rights (ECHR) in order to keep opponents of the Erdogan regime in prison. Biden, meanwhile, has referred to Erdogan as an “autocrat”.

“I cannot honestly say that there is a healthy process in Turkish-American relations,” he was reported as saying by Turkish media, according to The Associated Press. “Look, we bought the F-35s, paid $1.4 billion, and these F-35s were not delivered to us.”

He added: “It is my hope that, as two Nato countries, we should treat each other with friendship, not hostility. But the current trajectory does not bode well.”

Erdogan was reported also as observing that he had worked well with all the US presidents during his 19-year rule but “I can’t say that we started well with Mr Biden.”

Former US president Donald Trump was always seen as reluctant to impose sanctions on Erdogan, whom he often described as a leader he could do business with. Nevertheless, with the S-400 row unresolved, towards the end of the Trump presidency, Washington imposed sanctions on Turkey's Defence Industry Directorate, its chief Ismail Demir and three other employees.

In Congress, meanwhile, there has been enough opposition to Erdogan and Turkey’s behaviour as a Nato ally to ensure that an unofficial arms blockade, covering major hardware, has been maintained.

Moody’s downgrades Turkey to six notches below investment grade
Home of the humbled lira, Turkey’s the biggest cryptocurrency market in the Middle East
Envoy says start made on construction of Turkish attack drone factory in Ukraine