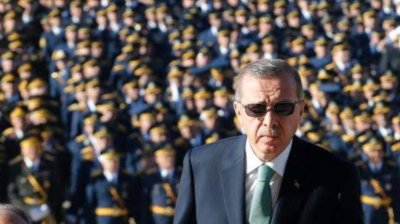 Erdogan complained to reporters that the Halkbank case was “unlawful, ugly” and that the issue was “supposedly closed”.
By Will Conroy in Prague October 16, 2019

Turkey’s Erdogan administration brought in more extraordinary measures to defend the country’s financial markets on October 16 after the US pressed a criminal case against state lender Turkiye Halk Bankasi (Halkbank) for participating in an Iran sanctions-busting conspiracy.

It is not clear exactly where the momentum to bring the case right now has come from. The investigation behind it has been simmering away for several years and the indictment has been filed in a Manhattan federal court by the US attorney for the Southern District of New York (SDNY). The SDNY is famously independent of its bosses at Main Justice, in Washington—given its resources, pursuit of high-profile cases and independence from presidential administrations, as well as its tenacity, the SDNY is sometimes referred to as the "Sovereign District of New York".

The move against government-owned Halkbank clearly has political overtones given that just the day before the White House authorised a set of sanctions against Turkey over the Syria offensive—sanctions that were mocked by critics as ‘fake sanctions’ and ‘sanctions lite’ as observers wondered whether US President Donald Trump was reluctant to pursue meaningful action against his counterpart and fellow populist, Turkish strongman president Recep Tayyip Erdogan. Because of the timing of the Halkbank indictment, there’s a risk the prosecution will be perceived as a political attack by the US on Turkey for its aggression, an anonymous official told Bloomberg. The official added that the charges in the years-long case should be seen as a frontal assault on Erdogan, whose level of knowledge of the alleged sanctions-evasion conspiracy has been probed by investigators.

Halkbank described the charges against it as an escalation of Washington’s Syria sanctions on Ankara, while Erdogan called them “unlawful, ugly”, telling reporters in Ankara that the Halkbank issue was “supposedly closed”.

The sanctions approved by Trump have not hurt the Turkish lira (TRY) and by around 18:50 Istanbul time on October 16 it appeared that the impact of the move against Halkbank had also failed to cause any depreciation in the currency. It was trading at 5.87, stronger vs the US dollar by 0.83% on the day. Of course, if state banks hadn’t been in action again selling dollars to the market, it might have been a different story.

A sign of the stress market jitters over US action on the Syria invasion are placing on the TRY—down around 4.5% in the month to date—came as Turkish one-week lira FX swaps jumped to 20.25% on October 16. The burst of measures introduced by officials to limit market volatility in Turkey reminded market players of the unprecedented freeze orchestrated by the Erdogan government on offshore lira trading back in March just prior to the local elections as part of strenuous efforts to prevent a pre-poll currency plunge that would remind voters of last year’s summer lira crisis.

The jump in the swaps rates tested the 2-1/2 month high hit earlier in the week. It came about after media reports that Turkish authorities had advised some local banks against offering lira liquidity in the offshore London money-market.

The situation contrasted with the pre-local elections move that sent the cost of borrowing in the Turkish currency in swaps markets soaring past 1,000%.

“It reads like a warning that if the lira sells off again that the liquidity could be squeezed,” TD Securities emerging market strategist Izidor Flajsman was cited as saying by Reuters.

He added: “Again, at stress points, the Turks are killing the offshore market for TRY—makes it difficult to hedge local bond exposure, so there will be a price. Not that foreigners were that invested/willing to invest in local government bonds. State owned banks have also been very active in selling dollar to prop up the currency.

“Proper coordinated effort under way at this stage to support the lira, against the backdrop of the Turkish military operation in Syria, sanctions and now the Halkbank indictment.”

In another move, the Borsa Istanbul said it was temporarily prohibiting short selling in banking shares within the top BIST30 Index, effective from October 16, within the scope of a decision taken by its chief executive. It said the shares affected were those of Halkbank, Akbank, Garanti Bank, Halkbank, Is Bank TSKB, Vakifbank and Yapi Kredi Bank.

Not unexpectedly, Halkbank took a direct hit following the news from the "Sovereign District of New York".  Its share price fell by the most in more than six months, dropping 7.4% as the market opened, the biggest intraday decline since March 27. That was even after the exchange imposed its short-selling ban. The price ended the trading day 4.07% down.

Meanwhile, the yield on Halkbank’s July 2021 dollar bond surged more than 450 bp to 13.9%. That was about double the yield on the similar-dated debt of some of its peers, a sign that investors were beginning to price in financial distress, Bloomberg noted. The bank last sold bonds overseas in July 2016. It last raised a syndicated loan from international lenders in December 2015.

Wide-ranging plot
The indictment against Halkbank accuses the lender of participating in a wide-ranging plot to violate prohibitions on Iran’s access to the US financial system. The conspiracy allegedly involved high-ranking government officials in Iran and Turkey, it said.

“Halkbank’s systemic participation in the illicit movement of billions of dollars’ worth of Iranian oil revenue was designed and executed by senior bank officials,” US Attorney Geoffrey Berman in New York said in a statement detailing the case. “Halkbank will now have to answer for its conduct in an American court.”

Two people, including a senior Halkbank executive, Mehmet Hakan Atilla, were convicted in the case in late 2017, with the trial prompting angry protests from Erdogan, who accused US officials of trying to harm his country’s national and economic interests and claimed his Gulenist enemies had brought the case about. He described the prosecution as nothing short of an “international coup attempt.”

Erdogan has previously pressed both President Barack Obama and Trump to intervene and dismiss the case.

Early in Trump’s term, former New York Mayor Rudy Giuliani was hired by the central figure in the case, Reza Zarrab, a flamboyant Iranian-Turkish gold trader, who in the trial implicated Erdogan in the sanctions-evasion operation. Giuliani conducted a shadow diplomacy effort to win his client’s freedom and on Giuliani’s behalf, Trump asked a member of his cabinet to steer prosecutors away from the case.

Several months after the sanctions-busting trial of Atilla ended with his conviction in early 2018, US officials entered into talks to negotiate a possible penalty with the bank. But no settlement was announced and the broader case seemed to go dormant.

Zarrab has related in court how he helped Iran tap funds from overseas oil sales that were frozen in foreign accounts. He pleaded guilty having become the star prosecution witness against Atilla.

US prosecutors allege that Halkbank became an essential participant in the plot, which was designed to secretly launder funds out of Turkey to Dubai. There, money could be shifted into the global financial system and made available to Iran. Prosecutors at the Atilla trial showed how Iranian funds were converted to gold, exported to Dubai, sold for cash and then distributed to the benefit of Iran. Around $1bn was converted into US dollars and transferred through banks in New York, they said.

Zarrab, who is married to a famous Turkish singer, is apparently extremely wealthy. US court documents said he was building a yacht longer than a football field with three personal submersibles.

ING: Russia balance of payments: supportive of ruble in the near-term, but risks for 2H21 mount.
5 days ago
ING: Growth in the Balkans: from zero to hero again?
11 days ago
FPRI BMB Ukraine: Most Ukrainians are optimistic about 2021 – poll
11 days ago
COMMENT: Record high debt levels will slow post-coronavirus recovery, threaten some countries' financial stability, says IIF
14 days ago
COMMENT: The Manafort Pardon: a finger in the collective eyes of Ukrainians
19 days ago