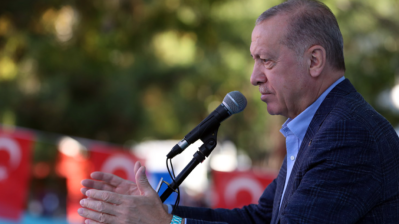 Erdogan addressing the crowd in the city of Eskisehir.
By bne IntelIiNews October 23, 2021

Turkish President Recep Tayyip Erdogan said in a speech on October 23 that he has ordered the foreign ministry to declare 10 ambassadors from western countries as persona non grata in response to their “impudent” call for the release of philanthropist Osman Kavala.

The speech smacked of a leader attempting to galvanize his core supporters and rally doubters back to his side. Erdogan is floundering in the opinion polls, widely accused of continued economic mismanagement that has sent the Turkish lira descending towards an astonishing 10-to-the-dollar, threatening Turkey with a second balance of payments crisis within around three years. October 22, meanwhile, brought more pressure and trouble for the authoritarian Turkish leader—subject to increasingly loud speculation about the state of his health—when a US appeals court rejected Turkish state lender Halkbank's bid to dismiss an indictment accusing the bank of assisting Iran in the evasion of American sanctions. Erdogan was implicated in the alleged sanctions-busting conspiracy at the heart of the case during a trial that resulted in the conviction of a top Halkbank executive, but he strenuously denied the claims made against him. The claims may be about to get another airing.

Whether Erdogan’s heated rhetoric directed at the diplomats will be followed by their enforced departure, or whether the matter will be allowed to fade away, is unclear but the Turkish “executive president” (Erdogan has abolished the post of prime minister) didn’t mince his words in his speech delivered to a cheering crowd in the northwestern city of Eskisehir.

“I gave the necessary order to our foreign minister and said what must be done: these 10 ambassadors must be declared persona non grata at once … immediately,” said Erdogan, as reported by Reuters.

In Turkey, Osman Kavala has become something of a “George Soros”, Soros being a supporter of progressive and liberal causes to which he provides donations, and a bogeyman to populists.

Kavala has been in prison for four years. He is charged with financing the “Gezi Park” nationwide protests in 2013 and involvement in the failed coup of July 2016 aimed at toppling the Erdogan administration. He denies the charges.

In a joint statement on 18 October, the ambassadors of Canada, Denmark, Finland, France, Germany, the Netherlands, New Zealand, Norway, Sweden and the US called for a just and speedy resolution to Kavala’s case. They also called for his “urgent release”. The envoys were summoned by the Turkish foreign ministry. It called their statement irresponsible.

Kavala was acquitted last year of charges related to the 2013 protests. However, the ruling was overturned this year and combined with charges in another case related to the coup attempt.

Rights groups have long said his case is an illustration of how Erdogan exploited the aftermath of the foiled coup to go after opponents, mounting a wide-ranging crackdown on dissent, with hundreds of thousands dismissed from their state jobs or arrested, or both.

On October 21, Erdogan was reported as saying in response to the ambassadors’ Kavala statement that the envoys would not release “bandits, murderers and terrorists” in their own countries.

Kavala responded in a written statement that it would be “meaningless” for him to attend his trial as a fair hearing was impossible given Erdogan’s most recent comments.

“Since there is no possibility of a fair trial under these circumstances, I believe participating in hearings and delivering my defence will be meaningless from now on,” Kavala added.

The European Court of Human Rights (ECHR) called for Kavala’s immediate release in late 2019, concluding that there was no reasonable suspicion that he had committed an offence, and finding that his detention had been intended to silence him.

The Council of Europe, which oversees the implementation of ECHR decisions, has stated that it will begin infringement proceedings against Turkey if Kavala is not released.

The next hearing in the Kavala case is due on November 26.

News agencies reported the US, German and French embassies and the White House and US State Department as not immediately responding to requests for comment on Erdogan’s speech.

Reuters reported the Norwegian foreign ministry as saying its embassy in Ankara had not received information from Turkish authorities regarding the matter.

“Our ambassador has not done anything that warrants an expulsion,” the ministry’s head of communications, Trude Maaseide, said, adding that Turkey was well aware of Norway’s view on this case.

“We will continue to call on Turkey to comply with democratic standards and the rule of law to which the country committed itself under the European Human Rights Convention,” Maaseide said.

While Erdogan picks new fights in the run-up to presidential and parliamentary elections that must take place by June next year at the latest, the Halkbank battle has been rejoined. In its ruling, the 2nd US Circuit Court of Appeals said that even if the Foreign Sovereign Immunities Act shielded Hankbank as a state entity, the charge against the bank fell under the commercial activity exception.

The US approach to the Halkbank case, pursued by New York prosecutors, came up several times during the Donald Trump presidency, with Erdogan attempting to get it dropped. A memoir by John Bolton, a former US national security advisor to Trump, released last year, claimed Erdogan gave Trump a memo saying Halkbank was innocent, and Trump told Erdogan he would “take care of things”. The former US president was alleged by Bolton to have told his Turkish counterpart that “the southern district [of New York] prosecutors were not his people, but were [Barack] Obama people, a problem that would be fixed when they were replaced by his people”. Ankara claimed Bolton’s book misrepresented Erdogan’s conversations with Trump.

The case against Halkbank is that it converted oil revenue into gold and then cash to benefit Iranian interests and documented fake food shipments to justify oil proceed transfers. Prosecutors have said Halkbank helped Iran covertly transfer $20bn of restricted funds, with at least $1bn laundered through the US financial system.

Halkbank entered a plea of not guilty to bank fraud, money laundering and conspiracy charges over its claimed use of money servicers and front companies in Iran, Turkey and the United Arab Emirates to facilitate the sanctions evasion.

The bank went on to contend that it is immune from prosecution under the federal Foreign Sovereign Immunities Act given that it was "synonymous" with Turkey, which has immunity under that law.

Halkbank’s appeal was lodged against a ruling by US District Judge Richard Berman allowing it to be prosecuted.