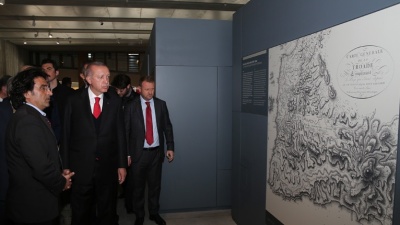 Erdogan being shown around at the opening of Troy Museum in northwest Turkey on March 18.
By bne IntelliNews March 18, 2019

Opponents of Erdogan were quick to claim that the populist president’s misguided use of the recordings made by the gunman showed how desperate he has become to pick up votes. His ruling AKP party is, they say, encountering a dejected electorate that faces economic hardship with Turkey having sunk into a recession with the March 31 local elections fast approaching.

Australian Brenton Tarrant, 28, a suspected white supremacist, was charged with murder on March 16 after a lone gunman killed 50 people at the two mosques. Turkish officials have discovered that in 2016 Tarrant twice visited Turkey.

At a rally on March 18, Erdogan described the mass shooting as part of a wider attack on Turkey and threatened to send back “in caskets” anyone who tried to take the battle to Istanbul.

Referring to the New Zealand attack as evidence of global anti-Muslim sentiment, Erdogan—who last week also had to digest news that the European Parliament is recommending that Turkey’s EU accession process is suspended because of its poor human rights record—said, without elaborating: “They are testing us from 16,500 kilometres away, from New Zealand, with the messages they are giving from there. This isn’t an individual act, this is organised.”

Erdogan also displayed extracts from a “manifesto” posted online by the attacker.

The gunman, he claimed, issued threats against Turkey and himself, and wanted to drive Turks from Turkey’s northwestern, European region. “We have been here for 1,000 years and will be here until the apocalypse, God willing,” Reuters reported Erdogan as telling the rally, commemorating the 1915 Gallipoli campaign, when Ottoman soldiers defeated British-led forces including Australian and New Zealand troops trying to seize the peninsula, a gateway to Istanbul.

“You will not turn Istanbul into Constantinople,” he added, referring to the city’s name under its Christian Byzantine rulers before it was conquered by the Muslim Ottomans in 1453.

“Your grandparents came here... and they returned in caskets,” he said. “Have no doubt we will send you back like your grandfathers.”

Rebuke
Erdogan’s showing of video footage of the shootings earned a rebuke from New Zealand’s foreign minister Peters who said it could endanger New Zealanders abroad. Speaking after a meeting of New Zealand’s cabinet, Peters said he told his Turkish counterpart Mehmet Cavusoglu—who was in Christchurch visiting Turkish citizens injured in the attack—that Erdogan’s use of the footage in an election campaign was wrong.

“Anything of that nature that misrepresents this country, given that this was a non-New Zealand citizen, imperils the future and safety of the New Zealand people and our people abroad, and that is totally unfair,” Peters added.

Given the economic turmoil in Turkey, many see the upcoming local elections as a referendum on Erdogan’s 16-year-long rule. Voters will elect mayors for 81 provincial capitals and 957 towns, but reports coming out of Turkey say that if you listen to Erdogan’s campaign trail speeches you might get the impression the vote is all about him.

The battle is between coalitions—Erdogan’s Justice and Development Party (AKP) and the allied ultra-nationalist National Action Party (MHP) that have formed the People’s Alliance, and the opposition parties led by the main opposition Republican People’s Party (CHP), which have put together the Nation Alliance.

Some analysts say that the intensity of the angry rhetoric unleashed by Erdogan against the Nation Alliance—for instance, he accuses it of sympathising with terror outfits—demonstrates how he is hastily trying to polarise and distract away from Turkey’s very real economic problems. Erdogan and the MHP talk about the coming vote as “a matter of survival” for Turkey with various enemies purportedly attempting to undermine the country.

Half of people ‘can’t afford red meat’
According to a poll by the Social Democracy Foundation cited by Al-Monitor, when asked what they can’t buy anymore, 51% of respondents said "red meat" and 23% said clothing.

Another worrying development for the AKP is in the southeastern provinces where Kurds are in the majority. It is quite possible that the pro-Kurdish People’s Democracy Party (HDP) will take all the mayoral posts.

The HDP, meanwhile, has not put forward candidates in major cities such as Istanbul, Ankara and Izmir. The ruling party is worried about the HDP strategy of “make the government lose in the west but we will win in the east”.

In Ankara and Izmir, where the HDP is thought to have voting potential of around 10%, the party will support the opposition. Most HDP voters in those cities are thus expected to vote for other opposition candidates.

Analysts say the loss of some big cities by the AKP and a poor election result overall for the party, along with new victories for the HDP, could even mean the triggering of an early general election.