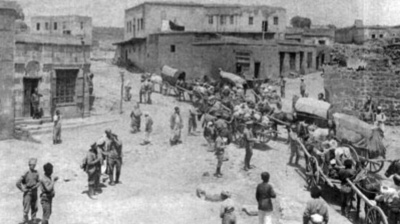 A photograph from the Armenian Genocide Museum showing Ottoman Armenians being deported.
By bne IntelIiNews April 24, 2021

As Soner Cagaptay, a historian and director of the Turkish Research Program at The Washington Institute for Near East Policy, explained in an opinion piece, Turkey’s leader knows well that now is not the time for a furious response from Ankara to the Biden administration’s historic declaration. “Erdogan faces a brittle Turkish economy. If his relations with Washington are in freefall, that can cause the Turkish economy to tank,” Cagaptay wrote in his analysis of the designation—announced on the 106th Remembrance Day of the genocide—for NBC News THINK.

“It took President Joe Biden more than three months in office to call Turkish President Recep Tayyip Erdogan. That alone was a sign of the fall in status of a country that was once one of America’s closest strategic allies across the Middle East, Southeastern Europe and the Eastern Mediterranean. But much worse for Ankara was the message Biden delivered when he finally picked up the phone Friday, as first reported by Bloomberg: The U.S. government was finally recognizing the 1915 Ottoman killing of Armenians as a genocide,” he added.

Addressing the question of why Biden is “treating Erdogan with such apparent political condescension”, Cagaptay concluded that the American president of three months “is simply aware that for the first time in many years, Erdogan needs the U.S. more than Washington needs him”. “Biden is,” added Cagaptay, “accordingly, using this window as a lever, hoping to correct some of Erdogan’s behavior, including his anti-democratic actions and close ties to Russian President Vladimir Putin”.

Cagaptay continued: “The crux of the issue now isn’t that Biden is mad at Erdogan, but rather that almost the entire U.S. government is. Many inside and outside the administration see Erdogan as an autocrat who poses a threat to U.S. interests regionally. Where Turkey was once a beacon of democracy among Muslim-majority nations, Erdogan’s clampdown on fair elections, freedom of speech and judicial independence have repulsed Americans.”

“Even at the State Department’s Bureau of European and Eurasian Affairs, which has traditionally dealt with Ankara, Turkeyphilia is fast going out of fashion,” pointed out Cagaptay, adding: “The overall sentiment inside the U.S. government is that Erdogan responds better to Putin-style toughness than to a warm embrace.”

However, the historian, noting that Putin can cause immense trouble for Erdogan in regional hotspots including Syria, the South Caucasus and Libya, should the Turkish president choose certain paths not in Russia’s interests, warned: “I’ve always thought that stuck between Biden and Putin, Erdogan would pick Putin. That point of reckoning might be around the corner.”

“I have written Erdogan’s political biography and know that he can be very pragmatic, but also quite Machiavellian,” concluded Cagaptay. “I am certain that whichever disconsolate and evasive words he chooses in his response to Biden’s designation, he will be looking for an opportunity to get back at the U.S. president—once the Turkish economy bounces back.”

“The American people honour all those Armenians who perished in the genocide that began 106 years ago today,” Biden said in a statement. “Beginning on 24 April 1915 with the arrest of Armenian intellectuals and community leaders in Constantinople by Ottoman authorities, one and a half million Armenians were deported, massacred or marched to their deaths in a campaign of extermination.”

He added: “Over the decades Armenian immigrants have enriched the United States in countless ways, but they have never forgotten the tragic history. We honor their story. We see that pain. We affirm the history. We do this not to cast blame but to ensure that what happened is never repeated.” 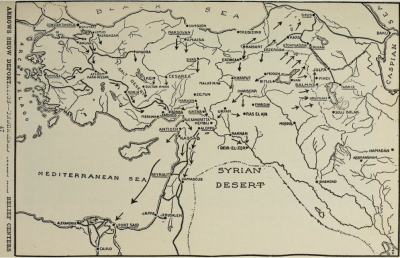 A map, published in 1916 in Leavening the Levant by Joseph R. Green, with arrows indicating claimed deportations of Armenians (Image: Flickr's The Commons).

The statement came a day after the phone conversation between Biden and Erdogan, which was reported to be tense—the issue of genocide recognition was not mentioned in official accounts of the exchange.

US administration officials sought to soften the impact of Biden’s announcement on relations with Ankara, emphasising that the genocide was carried out before modern Turkey was born and that the intention was not to blame but to embrace remembrance. They also stressed that Washington continues to see Turkey as a critical Nato ally (although the Nato relationship remains under strain, with the US refusing to deliver Turkey the world’s most advanced fighter plane, the F-35, because of Ankara’s purchase of S-400 missile batteries from the Kremlin). Erdogan and Biden remain scheduled to meet in June on the sidelines of a Nato summit in Brussels to discuss the full range of bilateral and regional issues.

Previous US presidents, including Barack Obama, abandoned campaign promises to recognise the Armenian genocide for fear of damaging US-Turkish relations. “With relations already in shambles, there was nothing to stop Biden from following through,” Nicholas Danforth, non-resident fellow for The Hellenic Foundation for European and Foreign Policy, was cited by Reuters as saying, adding: “Ankara has no allies left in the US government to lobby against this and Washington isn’t worried whether it angers Turkey anymore.”

Responding to Biden’s genocide recognition, Erdogan accused "third parties" of interfering in Turkey's affairs. "Nobody benefits from the debates—which should be held by historians—being politicised by third parties and becoming an instrument of interference in our country," Erdogan said in a message to the Armenian patriarch in Istanbul.

Denouncing Biden’s move, Turkish Foreign Minister Mevlut Cavusoglu said on Twitter: “We have nothing to learn from anybody on our own past. Political opportunism is the greatest betrayal to peace and justice. We entirely reject this statement based solely on populism.”

A release from the Turkish foreign ministry said: “It is clear that the said statement does not have a scholarly and legal basis, nor is it supported by any evidence. This statement … will open a deep wound that undermines our mutual trust and friendship. We call on the US president to correct this grave mistake.”

Several Turkish opposition politicians also spoke out against Biden’s genocide announcement, with Faik Oztrak, spokesman for the main opposition Republican People’s Party (CHP), saying that the move “will open wounds that will be difficult to repair not only on US-Turkey ties but also on a potential compromise between the people of Armenia and Turkey”.

Refuting the claim of genocide—the Turkish republic, established in 1923 after the Ottoman empire collapsed, has always denied there was a systematic campaign to annihilate Armenians, arguing that thousands of Turks and Armenians died in inter-ethnic violence as the empire started to fall apart and fought a Russian invasion of its eastern provinces during World War I, and that nothing constituting genocide took place—is a rare issue that unites Turkey’s ruling and opposition parties,

The US Embassy in Turkey said its missions in the country would be closed on Monday April 26 and Tuesday April 27 for visa services due to the possibility of protests.

After Biden’s announcement, Armenian Prime Minister Nikol Pashinian thanked the US president for "the powerful step towards justice and invaluable support for the descendants of the Armenian genocide victims".

Prior to the announcement, in a letter to Biden that referenced the Nagorno-Karabakh war of autumn last year—regarded as the world’s first “drone war” in which Turkish-armed Azerbaijan defeated Armenian forces after six weeks of fighting that ended with a Russian brokered ceasefire—said: "The recognition of the genocide is a matter of truth, historical justice and security to the Republic of Armenia, especially in the light of the events that took place in our region last year."

For its part, Azerbaijan, tightly allied with Turkey, described Biden's statement as "misrepresenting the events that happened 100 years ago".

"The falsification of history, attempts to rewrite history and the use of the issue for political pressure are unacceptable," Azerbaijan's foreign ministry added in a statement.

Aram Hamparian, executive director of the Armenian National Committee of America, said in a statement ahead of the Biden announcement that the US president would be "effectively ending the longest lasting foreign gag-rule in American history". He said the recognition would represent a “powerful setback to Turkey's century-long obstruction of justice for this crime, and its ongoing hostility and aggression against the Armenian people".

Reuters reported that in Montebello, California, a city in Los Angeles County that is home to many Armenian-Americans, members of the community held a small and sombre ceremony during which they placed a cross made of flowers at a monument to the victims. Some attendees wore pins reading “genocide denied genocide repeated”.