Erdogan: Turkey will “absolutely not” abide by US sanctions imposed on Iran 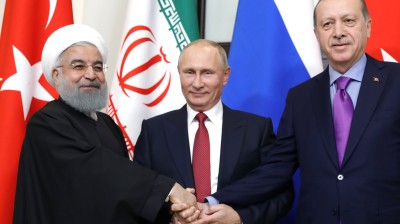 Turkish President Recep Tayyip Erdogan has said Turkey will “absolutely not” abide by the new wave of heavy US sanctions imposed on Iran.

Speaking to reporters at the parliament in Ankara on November 6, he said: “These are steps aimed at unbalancing the world. We don’t want to live in an imperialist world. These issues will be put on the table at the summit [to commemorate the end of World War I this weekend] in Paris.

“We will absolutely not abide by such sanctions. We buy 10 billion cubic metres of natural gas [from neighbouring Iran]. We cannot freeze our people in the cold.”

Separately, in Moscow’s first official comment on the new sanctions, Russian Foreign Minister Sergei Lavrov said the US measures were not legitimate. Criticising the US for using “unacceptable methods” to pressure operators of the SWIFT global financial network into cutting off Iranian banks, Lavrov—speaking in Madrid where he met counterpart Josep Borrell—said he expected that there would be ways to pursue economic cooperation with Iran despite the reimposition of the sanctions.

The new sanctions—which from November 5 hit Iran’s oil, gas, petrochemical, shipping and banking industries—are supposedly designed to strangle Iran’s economy to the point where Tehran is pressured to come to the table to renegotiate Iran’s involvement in Middle East affairs, but many analysts have noted they are so harsh—as the heaviest sanctions ever imposed on Iran by the US—that it seems that the White House’s objective must be to push for regime change.

"The reinstatement of US sanctions isn't so much about the details of the sanctions with the intent of changing the regime's behaviour," Steve Hanke, an economist at Johns Hopkins University in Baltimore, was quoted as saying by RFE/RL on November 6. "It's all about taking out and destroying the regime. The US sanctions are now all about total war."

Speaking in Japan earlier on November 6, Turkey’s Foreign Minister Mevlut Cavusoglu said it would be dangerous to isolate Iran. He added that it was not a simple matter for countries like Turkey and Japan to diversify energy supplies.

“We do not believe any result can be reached with sanctions. I think meaningful dialogue and talks are more useful than sanctions,” said.

As a concession to some countries that contend that reducing imports of Iranian oil overnight to zero would be impossible, the US has granted waivers to eight nations—Turkey, China, India, South Korea, Japan, Italy, Greece and Taiwan—allowing them to continue to purchase Iranian crude for another 180 days.

Erdogan is expected to have talks with Trump at the summit in Paris over issues including the Iran sanctions and resolving differences between Ankara and Washington over the Syria conflict.

Frustration builds over EU’s Iran SPV
Iranian officials, meanwhile, appear to be growing increasingly frustrated that the European Union is yet to announce the special purpose vehicle (SPV) it says will protect some import and export trade with Iran from US sanctions—but the Guardian on November 6 quoted Western sources as saying candidates have come forward to host the mechanism and details including the structure of its board and shareholdings were being discussed.

The newspaper also cited Iranian deputy foreign minister Kazem Sajjadpou, who was speaking in London, as saying in reference to the establishment of the SPV: “What is lacking is both speed and efficiency.”

It would be a great embarrassment to the EU if the bloc failed to create the SPV. France or Germany are seen as the most likely host countries, although the US has threatened to sanction any nation that agrees to register the vehicle. The EU, China and Russia still back the nuclear deal signed in late 2015 by the US and five other major powers, as well as Iran, to protect the Islamic Republic from crippling sanctions in return for measures barring its path to the development of a nuclear weapon.

Donald Trump unilaterally withdrew the US from the accord in May. Iran and all the other signatories have, however, stayed in the agreement and the SPV is seen as one way the EU can reward Tehran for staying committed to the accord. The other signatories say Iran has never breached the painstakingly negotiated nuclear deal, thus the US was wrong to walk away from it.

The SPV was agreed in principle two months ago but an EU plan to at least “symbolically” announce the mechanism on the eve of the introduction of the sanctions did not materialise.

The SPV would serve as a barter exchange. Its trades would neither be connected to the US dollar-denominated international financial system nor require monetary transfers between EU countries and Iran. It would be opaque to protect its users from US secondary sanctions. An Iranian company selling goods into Europe would accumulate credits. They could be used to buy a product from another European firm.

Officials are reportedly working through how the SPV would shield, for instance, a European firm operating in the US from secondary sanctions.

If the SPV comes into force, there are hopes that even non-European firms could start using it to trade with Iran in euro-denominated transactions.

Iran says the US is acting like an international “bully” that has disgraced itself by withdrawing from a multilateral agreement signed with respect for the principles of international negotiation. It suspects the White House is trying to achieve regime change in the Islamic Republic.

The US has attempted to dismiss the potential of the SPV. The US special representative on Iran, Brian Hook, said: “We have not seen much, if any, demand for the SPV. We do not anticipate any significant corporation using an SPV.”