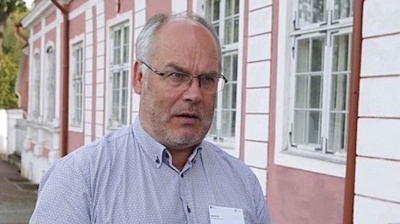 Karis was backed in the second round of the election in the Riigikogu by 72 MPs in a secret ballot, compared with 68 votes required to get elected.
By bne IntelliNews September 1, 2021

Alar Karis, who was elected as the next president of Estonia by the parliament on August 31, said that as head of state he will do all he can to engage with all political forces and find ways for Estonia to move forward.

Karis was backed in the second round of the election in the Riigikogu by 72 MPs in a secret ballot, compared with 68 votes required to get elected.

As reported by bneIntelliNews, Karis was the sole candidate in the election. Incumbent President Kersti Kaljulaid, Estonia's first female president, was excluded as she she enjoys little support from lawmakers, reportedly due to her outspokenness about fellow politicians and government policies.

Karis told reporters that it was a "perfectly respectable result".

Asked whether it was harder to become president or to be president, the director of the Estonian National Museum and former university rector and head of the National Audit Office said that the president's job is the same as all his previous jobs: it is relatively easy to get but hard to perform.

According to Karis, he will try to be a president who tries to communicate with all political forces and find ways for Estonia to move forward. President Kaljulaid does not meet with the far right EKRE party.

"We could have an educated and wise nation," Karis said, adding that this could be one of the mottos for his tenure.

He stated that the president needs to address both domestic and foreign policy issues. "It's a difficult task," he said.

Karis said that during his time as the head of state, he will try to engage with all political forces.

Karis also described unification of the people as one of his tasks. He noted that he did not have a toolkit with him to sew the gaps together, but at the same time expressed confidence that this was possible.

Karis said that he intends to follow the example of all previous presidents and add something that is unique to him.