EU may threaten Turkey with sanctions over Cyprus dispute 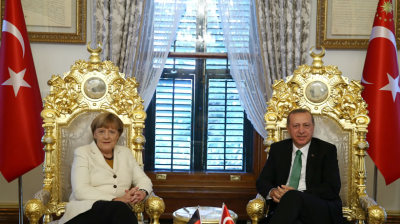 Angela Merkel seen on October 18, 2015 on Erdogan's throne at Yildiz Palace in Istanbul. Erdogan's AKP lost its parliamentary majority at the June 2015 polls and Merkel's photo was part of the Turkish populist's election campaign for the November 4, 2015 snap polls.
By bne IntelliNews July 11, 2019

The European Union’s row with Turkey over access to potential deposits of oil and gas in the disputed waters around Cyprus has flared up again.

The EU foreign ministers may adopt a joint statement to put on hold high-level talks and negotiations on the Comprehensive Air Transport Agreement with Turkey on July 15, Reuters reported on July 10 citing a leaked draft statement.

The draft statement also includes an article that would reduce the pre-accession assistance to Turkey for 2020 and invites the European Investment Bank to review its lending activities in Turkey, notably with regard to sovereign-backed lending, over “illegal” drilling for gas and oil off Cyprus.

The draft statement carries another implicit threat that the EU would be ready to introduce more restrictive measures against Turkey should Ankara continue drilling.

National envoys will discuss on July 11 the draft statement and they may change it, according to the news service.

The noise surrounding the Cyprus issue, part of which the EU say has been illegally occupied by Turkey, has been increasing Al-monitor reported on July 9 citing harsh comments and aggressive manoeuvres by ships in the region in a story entitled “Eastern Mediterranean crisis balloons as Turkish drill ships multiply”.

Despite some banner headlines, the EU’s remains in a difficult position in dealing with Turkish President Recep Tayyip Erdogan thank to the millions of refugees from wars in the Middle East that are sheltering in Turkey.

“It would only be targeting people linked to these specific illegal activities. We’re trying to calibrate that carefully because we need Turkish cooperation on migration, NATO, countering terrorism… Some member states rely on Turkey for energy transit so we must tread carefully. Don’t expect any wide economic sanctions,” an EU diplomat involved in the discussions told Reuters.

The EU depends on Erdogan to holdback a tsunami of refuges. Security fears within the EU is undermining the unity as some states have lurched to the right and rising populism in many countries has been stoked by numerous terror attacks. Erdogan has skilfully played on these factors to give himself a wide space in which to manoeuvre, as in the case of oil and gas exploration in the waters off Cyprus.

The EU has frozen Turkey’s long-stalled membership talks as well as negotiations on upgrading their customs union, accusing Erdogan of widespread violations of human rights.

Erdogan sees the EU’s decisions as “null and void”.