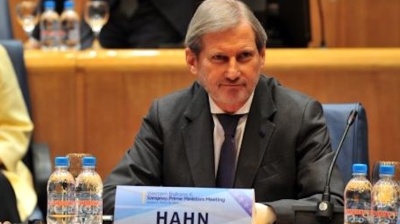 By Denitsa Koseva in Sofia September 7, 2019

The European Commissioner for Neighbourhood Policy and Enlargement Negotiations Johannes Hahn has proposed a meeting with the three members of Bosnia & Herzegovina’s state-level presidency, offering to help them resolve the political deadlock and form a state-level government 11 months after the October 2018 general election.

On September 5, the deadline by which Bosnia’s main ethnic parties had pledged to form a government expired, and a compromise seems unreachable for the moment.

On August 5, the leaders of the three main ethnic parties – Bakir Izetbegovic of the Bosniak Party of Democratic Action (SDA), Milorad Dodik of the Serb Alliance of Independent Social Democrats (SNSD) and Dragan Covic of the Croatian Democratic Union (HDZ) – announced they had reached a compromise and signed a long-awaited coalition agreement, pledging to form a state-level government within 30 days.

However, in the following days a deep conflict emerged over Bosnia’s activities related to future Nato membership.

According to the coalition agreement, a government was supposed to be formed as long as Bosnia remained committed to “advancing the relationship with Nato without predicting future decisions in relation to membership of Bosnia & Herzegovina.”

However, Dodik fiercely opposed sending an Annual National Programme (ANP) to Nato, thereby blocking formation of the government. The two other presidents – Bosniak Sefik Dzaferovic and Croat Zeljko Komsic – insist on this step and have said they will not agree to appoint a new prime minister without implementation of this part of the coalition agreement.

According to N1, Hahn said he was ready to either visit Bosnia or meet the three presidents in Brussels and help them to find a compromise and nominate a prime minister.

“I encouraged the #BiH political leadership to continue the #dialogue in order to agree on the formation of government without further delay. This is necessary for advancing on #BiH's #EU path,” Hahn tweeted.

"The current stalemate undermines legitimate expectations of #BiH citizens for a prosperous future in their own country!"

In an official statement, he has also called on presidency members to respect the August 5 agreement and quickly form a government.

“I expect them to stand up to their responsibility and continue the dialogue with the objective of nominating the Council of Ministers, without further delay, almost one year after elections took place. This is necessary to follow up to the Commission’s Opinion on BiH EU membership application,” Hahn said in the statement.

Meanwhile, Dodik was quoted by N1 as saying he would never agree to send the ANP before the government’s formation.

“I have nothing against submitting a document, whatever they want to call it, to the Council of Ministers to decide on, but for someone to say how that Council should decide beforehand, that is a different thing and impossible,” Dodik said as quoted by N1.

He added that his party has never opposed cooperation with Nato, but does not want any steps taken toward membership.

“We have a certain kind of cooperation, we understand that that large-scale military integration is and we are prepared to cooperate [with Nato] at the same level Serbia is cooperating with it on that issue,” Dodik told reporters.

A prime minister should be nominated by the Serb entity. Dodik wanted to propose fellow SNSD member Zoran Tegeltija to head the new government, but at the end of August he gave up on nominating anyone as the other two presidents had given clear signals they would not back any nomination before sending the ANP.