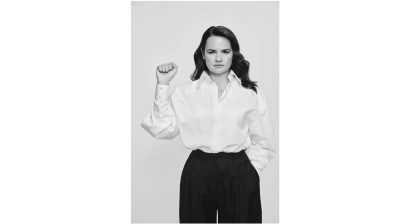 Emanuelis Zingeris, a Lithuanian MP and vice-chairman of the Human Rights and Legal Affairs Committee in the Parliamentary Assembly of the Council of Europe
By Linas Jegelevicius August 11, 2020

The top Belarusian opposition candidate in the presidential vote on August 9, Svetlana Tikhanovskaya, entered Lithuania in the early hours of August 11. bne IntelliNews talks to Emanuelis Zingeris, a Lithuanian MP and vice-chairman of the Human Rights and Legal Affairs Committee in the Parliamentary Assembly of the Council of Europe about the Belarusian Revolution.

She was due to meet her children and husband in the Lithuanian capital Vilnius later. Reports emerged in the evening of August 11 that she had been forced to flee the country after authorities threatened to arrest her friends and colleagues from her presidential campaign, some of whom had already been detained and were being held hostage by the Lukashenko regime.

Officially Tikhanovskaya only garnered 6.8% of the votes in the Auugst 9 election, but at two dozen polling stations that released the actual vote tallies put her at over 60% to Lukashenko’s circa 15%. The election has been unequivocally deemed rigged.

Tikhanovskaya went on Youtube, tearfully apologising to her supporters, exhorting them to end demonstrations and insisting it was her own decision to leave Belarus. It was reported that the video was actually made while she was in the offices of the Central Election Commission (CEC) filing a complaint of vote rigging and was part of the deal forced on her by the authorities that was released after she left the country.

The Foreign Ministry of Lithuania said she had been granted a year-long visa to stay in Lithuania. Emanuelis Zingeris, a Lithuanian MP and vice-chairman of the Human Rights and Legal Affairs Committee in the Parliamentary Assembly of the Council of Europe, told bne Intellinews that her departure from Belarus must deal “a tremendous blow” to the entire Belarusian opposition and hoped that Tikhanovskaya will stay in the battle against Lukashenko regime.

“But from the human point of view I understand her withdrawal completely. She is a mother and a wife who has embodied a revolutionist for many. But in Vilnius she is safe,” he emphasised.

Does Tikhanovskaya’s arrival in Vilnius mean an abrupt end to the massive protests in Belarus?

"It is not the end, but it is clearly a huge blow to what was happening in Belarus lately. I mean the protests and the demonstrations. The Belarusian nation deserves no less than the Ukrainians, the Poles or us Lithuanians who have fought hard for their freedom.

But imagine that Vaclav Havel, the Czech statesman who has played a key role in the liberation of Czechs, Lech Walesa, the initiator of Poland’s “Solidarnostj”, the national movement that paved way for Poland’s freedom, or Vytautas Landsbergis, the chairman of “Sajudis”, the national movement that led to Lithuania breaking away from the Soviet Union, had left their respective countries when their presence mattered most there. Wouldn’t the countries look quite different now?

I, however, understand the decision of Tikhanovskaya to act the way she has acted, but she has been entrusted by thousands of Belarusians. Moreover – she is factually a new president of the country. Having left the country humbly, she disappointed many people, let’s be honest."

Does her statement on Youtube seem genuine and authentic to you? She might have been compelled to air it to be allowed to go to Vilnius.

"That’s a possibility, although she has reiterated having arrived in Vilnius that she did it on her own. Even if she did it without coercion, panic attacks under the circumstances she found herself in are quite comprehensible. Had she waited a little bit longer there, her decision might have been different. Now the Belarusian regime is victorious – Tikhanovskaya is depicted as a traitor, coward and so on."

"No. Far from that. He must understand his days (as the president) are numbered. Quite a new generation of Belarusians have grown, one relying not on the state Belarusian media news. He is obsolete as a politician. Can you imagine, Nikolaj Chausesku, the deposed Romanian strongman in 1989, back in power now? The same can be said of Lukashenko. That Tikhanovskaya left is a big success of Lukashenko’s top state security heads."

Do you know how Tikhanovskaya is doing in Vilnius today?

"As far as I know, she is doing fine, she is being heavily guarded. She needs time to recover from the stress and the threats she has been through lately. I am happy that Vilnius has become a haven for Belarusian and Russian oppositionists. I am convinced she has to continue her fight against the Lukashenko regime once she feels fine again."

But can she do that taking into account her absence and limited resources and so on?

"Fortunately, nowadays we have a lot more means to reach out to the public than in the old days. So she does. What democratic countries ought to do now is to internationally seek recognition of illegitimacy of Lukashenko and his government. Furthermore – seek recognition of Tikhanovskaya as a new president. Whether this will be done remains to be seen in the coming days. I hope Tikhanovskaya will play her part in all of this. I understand, however, the regime will do whatever it can to erase her from the public’s consciousness and limit her outreach. But that may be not enough."

The shift is motivated in part by energy considerations and in part by nationalist politics.

Lack of commitment to the rule of law and judicial reform are causing consternation, while the increasingly politically motivated actions of recently appointed General Prosecutor Iryna Venedyktova are raising tensions.

A new growth area in a clean new world

Hungary-based producer of anti-bacterial coatings Resysten was doing respectably well before the coronavirus pandemic caused demand for its product to explode.

Russia to vote in 83 regional elections

Russia goes to the polls this weekend for important regional elections in 83 regions where the Kremlin will face a challenge due to the sinking popularity of the ruling United Russia Party.

A group of international doctors have written to the British medical magazine The Lancet raising questions about the veracity of data presented in a recent paper that showed Russia's Sputnik V vaccine was “100% effective” in Phase II trials.