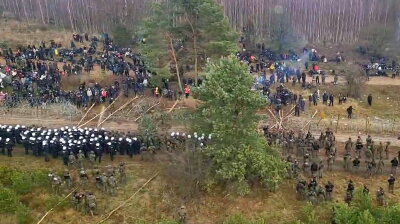 EU to expand the scope of sanctions on Belarus as migrant crisis deepens
By bne IntelliNews November 15, 2021

EU foreign ministers meeting in Brussels said on November 15 they will expand the scope of sanctions on Belarus in response to the migrant crisis on the border with Poland, where thousands of refugees are trapped in rapidly deteriorating conditions.

Specifically, the new sanctions could target airlines and tourist agencies, including the individuals that run them, that are facilitating the flow of migrants to Minsk, mostly from the Middle East, according to the European Union's foreign policy chief Josep Borrell.

The decision by 27 EU foreign ministers reflected “the determination by the European Union to stand up to the instrumentalisation of migrants for political purposes,” Borrell said.

In addition, the idea of cancelling overflight rights for Belarusian aviation was mooted in an effort to prevent planes from getting to Minsk. But apart from the general comments, few details were released and diplomats attending the meeting said it would take several weeks to thrash out concrete measures and draw up lists of those that could be targeted.

The EU has accused Belarus of a “hybrid war” that has drawn up to 10,000 migrants to Belarus with the promise of allowing them to cross into the EU since August. Most migrants are hoping to reach Germany, where the social benefits for asylum seekers are amongst the most generous on offer, but Poland has a hard line on migrants and will not admit them or allow them to transit through its territory on their way to Germany.

Two diplomats told Reuters that the EU is also considering imposing sanctions on Belarus' main airport in a bid to make it more difficult for airlines to bring in migrants.

"We will give the green light to extending the legal framework of our sanctions against Belarus so that it can be applied to everyone who participates in smuggling migrants to this country," Borrell told French weekend newspaper Le Journal du Dimanche.

Borrell added that executives at airlines and travel agencies could be hit with travel bans and asset freezes in the European Union. Some 30 Belarus government officials thought to be involved in the crisis could also be targeted with sanctions, Borrell said.

The EU has already imposed four rounds of sanctions on the Belarusian authorities and senior officials over last year’s disputed election and the brutal crackdown on peaceful protesters that followed.

“We are far from the end of the spiral of sanctions,” German Foreign Minister Heiko Maas said. “Those that don’t must expect tough sanctions. The situation is so dramatic that I can no longer rule out the denial of overflight rights or landing permission in the European area.”

Belarus flag carrier Belavia is among the airlines likely to be targeted, and Maas called on other companies to follow the example of Turkish Airlines by restricting flights to the Belarus capital. Istanbul has been a major transit route from the Middle East, where migrants can board Belavia planes to Minsk. However, under pressure from the EU Turkey has cancelled those flights since the end of last week. Migrants have already switched to alternative routes via Damascus and Beirut on their way to Minsk.

Russia’s Aeroflot is not expected to be included in the sanctions list. Aeroflot issued a statement last week after its name was mentioned as a possible sanctions target pointing out that it doesn't fly to Minsk from the Middle East and has been in no way involved in ferrying migrants to Belarus.

Poland and the Baltic states have been vocally accusing Moscow of orchestrating the crisis, claims that Russia has equally vigorously denied. As bne IntelliNews columnist Mark Galeotti argued in his latest column it is unlikely that Russian President Vladimir Putin has had much to do with the idea, but at the same time the Kremlin has not been shy of taking advantage of the melee.

Lukashenko also offered to fly anyone that wanted to go home back to their country of origin, but then went on to say none of the migrants wanted to leave.

“We’re ready … to put them on planes that will carry them back home,” said Lukashenko in televised remarks to government officials. “But these are people who, it must be said, are very stubborn: Nobody wants to go back. And it’s clear why: they have nowhere to go back to.”

A large crowd of migrants and refugees had gathered at a shut border crossing between Poland and Belarus, videos released by Poland’s border guards and defence ministry showed on November 15.

“More and more groups of migrants are being brought to the Kuznica border crossing by Belarusian forces,” the defence ministry said on Twitter, as videos appeared to show hundreds of people in front of lines of Polish police and soldiers.

Deputy Interior Minister Maciej Wasik said there were “thousands of migrants” at the crossing. “Polish forces are prepared for any scenario,” he said as cited by Al Jazeera.

Latvia has deployed 3,000 troops for a previously unannounced military exercise near its border with Belarus amid the border crisis.

“We cannot exclude that part of these (migrant) groups will move further north and can reach the Latvian border. We’re ready for it,” Latvian Defence Minister Artis Pabriks told the national broadcaster.

The message to Belarus is that the Latvian army movements are “not just for fun”, he added.

The military drill began on Saturday and is scheduled to last until December 12, army spokeswoman Sandra Brale told the Baltic News Service.

Controversial former president sanctioned by the US for corruption returns as opposition leader as Albanian parliament prepares to elect new president.

Gazprom, Russia’s state-run natural gas giant, said on Saturday, May 21 that it had stopped all deliveries to Finland as of 6:00 a.m. local time.

Sali Berisha returns as leader of Albania’s opposition Democrats
2 hours ago
Russia halts gas deliveries to Finland
3 hours ago
Belarus expands its use of the death penalty
2 days ago
The Mariupol siege is over as the last Azov defenders surrender
2 days ago
Kyrgyzstan: Eccentric health minister fights for his job amid claims of corruption and bullying
3 days ago