Eurasians come in from the (financial) cold

Banking penetration in Mongolia is the highest of any lower-middle-income country worldwide thanks to the soaring number of Mongolians with mobile money accounts.
By Clare Nuttall in Bucharest June 1, 2018

The number of adults with at least one bank account has soared in several Eurasian countries, new data from the World Bank on financial inclusion has revealed.

The latest Global Financial Inclusion (Global Findex) database shows bank account ownership rose from just 2% in Turkmenistan in 2014 to 41% in 2017 — a staggering 1,950% increase. Bank account ownership also increased by 327% in Tajikistan, while the figure was between 100% and 200% in Armenia, Moldova and the Kyrgyz Republic, in all of which between 40% and 50% of adults now have bank accounts. 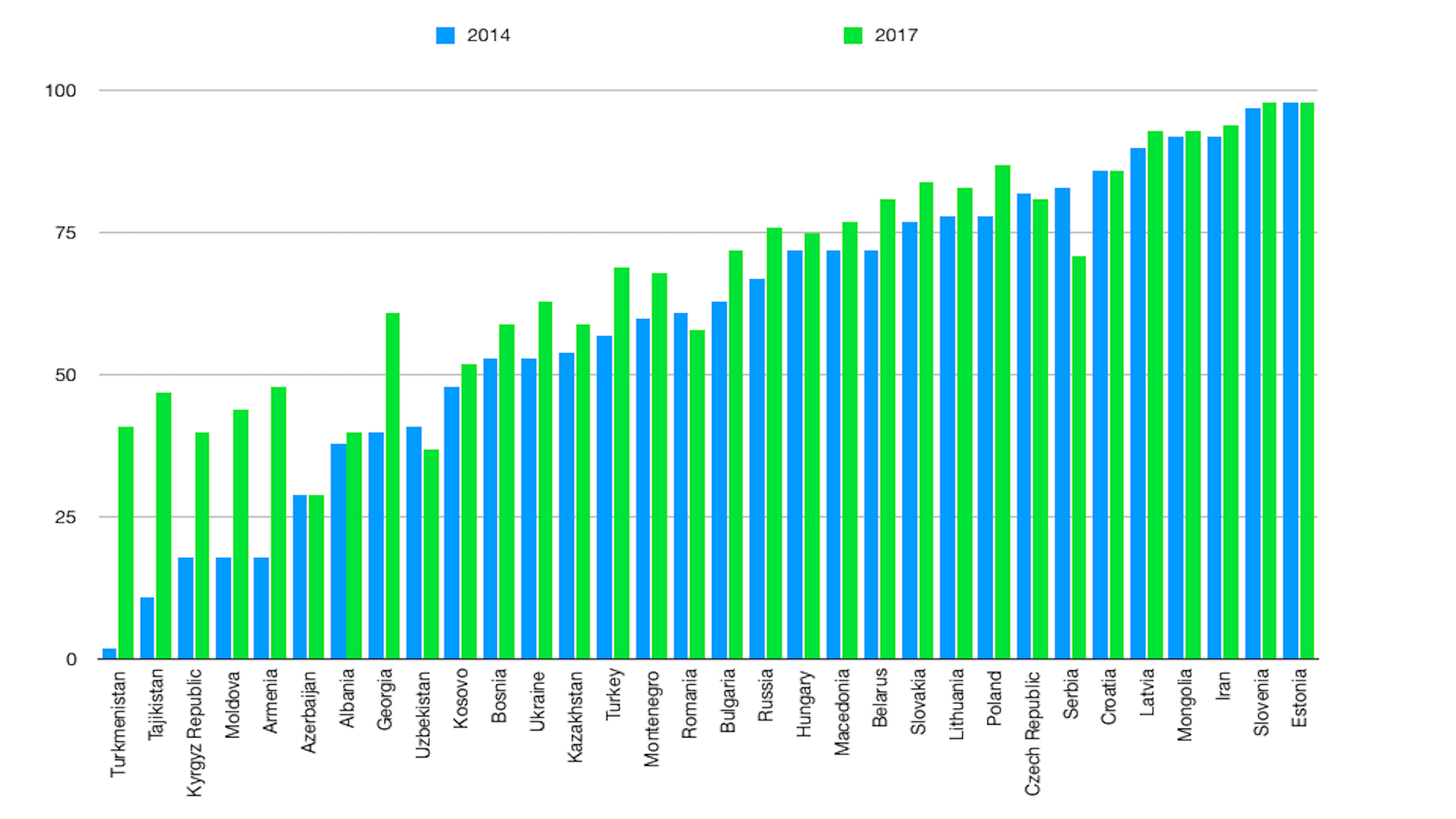 This far outstrips the growth in bank account ownership worldwide revealed by the three Global Findex surveys carried out by the World Bank with funding from the Bill & Melinda Gates Foundation in 2011, 2014 and 2017. They show a steady increase in the share of adults with a bank account, which rose from 51% to 62% to 69%. Between 2014 and 2017, 515mn adults worldwide opened an account at a financial institution or through a mobile money provider, says the latest report published in May. Globally, the lowest penetration rate was in the Central African Republic, at just 14%, followed by Afghanistan, at 15%, while in some North European countries plus Australia and Canada 100% of adults had bank accounts. 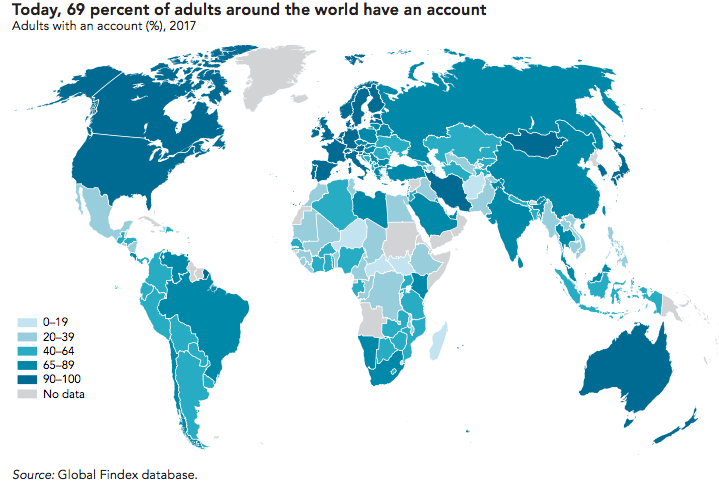 Not surprisingly, almost all of the 1.7bn unbanked adults are in the developing world, while account ownership is nearly universal in high-income economies, the survey of more than 140 economies shows. Some 94% of adults in developed countries have an account, compared to 63% in developing economies.

There are dramatic variations within regions though. Across Central and Eastern Europe and Eurasia, the percentage of the population with a bank account ranged from 98% in Estonia and Slovenia to just 29% in Azerbaijan as of 2017.

Despite the increases in several Eurasian economies, the countries with the lowest proportion of bank account ownership in the region are still clustered within Eurasia. Yet this phenomenon isn’t exclusive to Eurasia. Across the wider region, Albania was third from the bottom on a par with Kyrgyzstan in 2017, with just 40% of adults having a bank account, the aspiring EU member having been overtaken by several Central Asian countries. There is also low banking penetration in Moldova, Kosovo and Bosnia. Romania has the lowest share of account ownership in the EU, at just 58%, down from 61% in 2014, possibly because of the mass emigration of educated, working age Romanians. 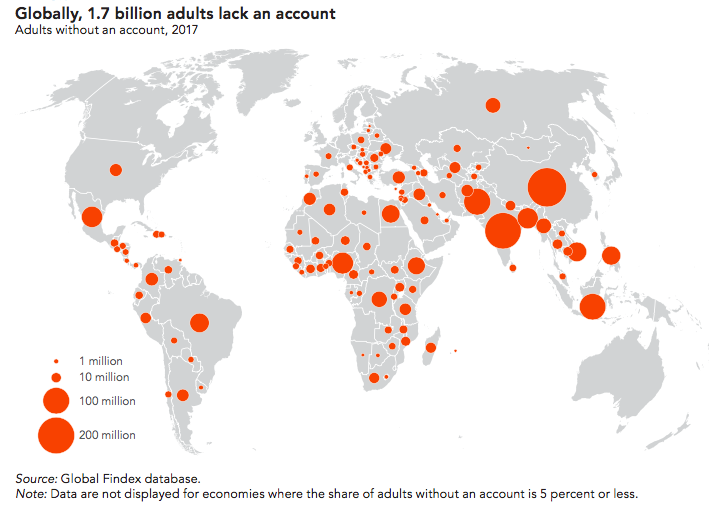 Mongolia is a perhaps the surprising entry among the most banked nations in the region, being ranked in fifth place with banking penetration of 93% — the highest of any lower-middle-income country worldwide.

Mobile makes sense in Mongolia, the world’s most sparsely populated country, where large numbers of people still have a nomadic lifestyle and hundreds of thousands more live in the yurt shanty towns that have sprung up on the hills around the capital Ulannbataar, with infrastructure like fixed line telephone links failing to keep pace. This has encouraged Mongolian banks to roll out mobile banking services in what has been a successful attempt to encourage Mongolians to use their services.

And while some countries have forged ahead of their neighbours in terms of banking penetration, there are also wide gaps within countries along gender, wealth, education, employment and age lines.

Turkey is a prime example of this. The country has a gender gap of almost 30 percentage points (pp), similar to Bangladesh and Pakistan. Among the survey respondents, 72% of women who did not have an account said it was because a family member already has one. Yet in contrast to other countries with a double-digit gender gap in account ownership, once Turkish women had opened an account they were just as active in men at using digital payments.

Globally women are over-represented among the unbanked, making up around 980mn or 56% of all unbanked adults lacking an account. But this is not the case in a number of post-Communist countries, among them Azerbaijan, Belarus, Kyrgyzstan, Russia and Serbia, where the gap is negligible or non-existent.

The wealth gap also grew in Turkey where account ownership increased strongly among wealthier adults but only modestly among poorer ones, pushing the gap up to 20pp in the 2017 survey.

The World Bank surveys gave insights into why so many people are still unbanked. The most common reason, given by two-thirds of respondents, was that they did not have enough money to use an account. Other factors were cost, distance, a family member already having an account, lack of documentation and distrust in the financial system.

The adoption of commercial services like mobile banking and online retail have already pushed up the number of people with bank accounts in several countries in the region, with governments starting to make wage, pension and benefit payments into bank accounts another contributing factor.

This is particularly relevant in Europe and Central Asia, where a high share of adults receive government payments. “Indeed, this share is about twice the average for developing economies, driven by the large numbers receiving public sector wage or pension payments,” says the report.

“Millions of unbanked adults around the world still receive regular payments in cash — for wages, from the government, for the sale of agricultural products. Digitising such payments is a proven way to increase account ownership,” says the report.

There is room to build on this progress, it adds, as currently around 100mn unbanked adults receive government payments in cash, including public sector wages, pensions and benefits. This is particularly relevant in Europe and Central Asia, where the share of the population receiving government payments is generally high by international standards.

Looking at the potential to bring such payments into accounts, the report points to how around 12% of unbanked adults receive government payments in cash in Uzbekistan, and as much as 24% in Russia.

The same is true for pensions: “In Europe and Central Asia digitising public sector pension payments could have a big impact. In Russia and Ukraine about a quarter of unbanked adults receive such payments in cash. In Romania about a third do.”

The report stresses the benefits of moving from cash payments to payments into bank accounts, such as by increasing speed, reducing costs, lowering the risk of crime, increasing transparency and reducing corruption, and encouraging saving by bringing citizens into the formal financial system. New technologies such as those enabling mobile banking are helping this process.

The authors do, however, stress that both the private sector and governments need to “ensure that digital payments are indeed better than the cash-based alternatives — safer, more affordable, and more transparent.”

Achieving this involves action ranging from technology and infrastructure moves such as providing electricity connections and mobile phone masts, to regulatory framework measures to ensure that consumers are protected.

Failures to act in such areas would mean efforts by governments to make more payments to bank accounts rather than in cash would be self-defeating. “[D]igitising payments of wages and government benefits has the potential to increase both the ownership and use of accounts,” the report says. “Yet efforts to digitise such payments have suffered from shortcomings. A common complaint among those receiving government transfers as digital payments is that the payment products are difficult to use. Recipients have reported long lines at bank agents and said that they struggle to get help when they have a question or a problem with their payments. Others have reported being targeted for fraud.”

Russia accounts for 97% of the trade in the EEU