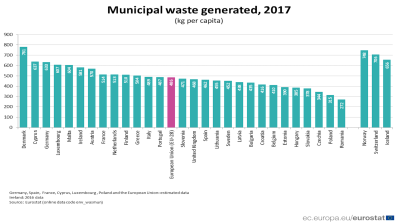 Despite the recent consumer boom, all but one of the eastern EU members produces less waste than any western member, a new study from Eurostat shows.

Across the bloc, the average amount of municipal waste generated per person in the EU in 2017 is estimated at 486kg. This is the same level as in 2016 and 7% below the peak of 525kg per person in 2002, showing the result of efforts in waste reduction across the bloc.

Every one of the new EU members produces less waste than the EU average, with only two countries from the western half of the bloc — Spain and the UK — producing less than average.

However, the EU’s statistics office points out: “The variations reflect differences in consumption patterns and economic wealth, but also depend on how municipal waste is collected and managed. There are differences between countries regarding the degree to which waste from commerce, trade and administration is collected and managed together with waste from households."

There are also differences in how waste is handled, separate 2016 data from Eurostat shows.

Landfilling is “almost non-existent” in West European countries such as Belgium, the Netherlands, Denmark, Sweden, Germany, Austria and Finland.

On the other hand, “The practice of landfilling remains popular in the eastern and southern parts of Europe. Twelve countries landfill almost half or more of their municipal waste.” This figure was over 80% in Malta, Greece, Cyprus and Romania as of 2016, and more than 60% in Croatia, Latvia, Slovakia and Bulgaria.

Waste management is even less advanced in countries further east, where governments in states such as Russia and Armenia are under heavy pressure from increasingly politically active populations to improve collection and reduce the environmental impact of waste disposal.

Retail surpass pre-crisis peak as Romanians shop instead of holiday

With fewer holiday options, Romanians seem to have refurnished their homes and renewed their home appliance stock.

Real wages in Ukraine jumped 10.6% y/y in October, feeding a sharp pick up in consumption, but in dollar terms the weakening currency means wages have been stagnating and stuck at circa $430 for almost a year now.

The seasonally adjusted IHS Markit Russia Services Business Activity Index registered 48.2 in November, up from October's five-month low of 46.9, but still below the 50 no-change mark.

Poland’s manufacturers continue to struggle for a decisive lift-off after the spring lockdown.

Pandemic had “increasingly severe effect on supply chains in November, with lead times lengthening to the third-largest extent in the survey’s history”.

Retail surpass pre-crisis peak as Romanians shop instead of holiday
1 day ago
Ukraine’s real wages up over 10% in October but have been stagnant in dollar terms for almost a year
1 day ago
Russian services PMI rises to 48.2, but remains underwater as recovery continues to slow
2 days ago
Poland’s PMI remains stuck just above the improvement line at 50.8 in November
3 days ago
Second virus wave ‘took wind out of Turkish manufacturing’s sails in November latest PMI shows’
3 days ago