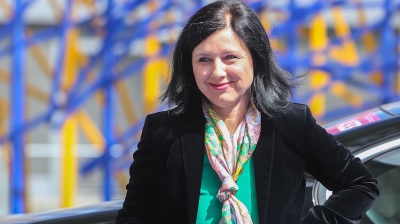 Czech Commissioner Vera Jourova has proved a strong defender of the rule of law.
By Robert Anderson in Prague February 25, 2021

The European Commission hopes to use the new rule of law conditionality tool to contain the erosion of democracy in Hungary and Poland this year, Vera Jourova, Vice-President for Values and Transparency, told an online debate held by Budapest's Central European University (CEU) on February 24.

Jourova said the Commission had to wait for the European Court of Justice (ECJ) to rule on the legality of the tool – which will allow budget payments to be held back if states endanger the EU budget by violating the rule of law – following a concession to Poland and Hungary at the European Council in December.

Nevertheless, she hoped that would still allow an investigation to be opened this year, and the Commission was planning for that. “This [tool] is a big step forward,” she said. “We needed it.”

However, this timetable looks ambitious. Poland and Hungary were allowed to challenge the mechanism before it had even been used, and the ECJ might take one or two years to decide the case.

“What I was disappointed with was that Hungary and Poland were able to negotiate a deferral,” said panellist Michal Simecka, an MEP for the Progressive Slovakia Party and Vice-Chair for the liberal Renew Europe grouping in the European Parliament. “It plays well into the hands of [Hungarian premier] Viktor Orban, who faces an election in one year.”

Jourova said that Hungary – which is now only ranked “partly free” by Freedom House – was a real concern. “The Hungarian situation is the most worrying one,” she said. “For me, Hungary is a very big problem,” she reiterated, adding: “The Commission will do everything to cure the problem by means of our competences.”

The Commissioner said that the EU relied on mutual trust but that “this trust has been shattered” and some courts in the bloc no longer trusted decisions made in states where democracy and the rule of law had come into question. “The Commission will not shy away from its role as the guardian of the treaties,” she warned.

The Commission is trying to publicise more the way states are weakening democracy and the rule of law. Last year it launched the first of its annual Rule of Law Reports. For Hungary, the report raised concerns over judicial independence, corruption, media freedom and pressure on civil society, including legislation forcing NGOs to publicise foreign funding. The ECJ has ruled that this law infringes the EU Treaty.

Other panellists emphasised the threat that the dismantling of democracy, fundamental rights and the rule of law by the radical right-wing governments of Poland and Hungary posed to the whole EU project.

“We need to protect our common project, our democracy, against these threats,” said Clement Beaune, French Secretary of State for European Affairs.

“For the EU project to be viable in the long run we have to have mutual trust,” said Simecka. “[Otherwise] it will be impossible for the EU to survive.” He quoted with approval political scientist Ivan Krastev's quip that illiberal democracy stood in the same relation to democracy as an electric chair stood to a real chair.

“It matters to me as a citizen of another country if some members of a European Council are not elected democratically,” he pointed out. “But there is nothing in the current set-up that we can do.”

He warned that despite the European Commission taking the issue more seriously, “the situation on the ground is not improving but is in fact worsening.”

Jourova – who was hailed by Simecka as personally very committed to defending the rule of law (despite being nominated by Orban's ally, Czech Prime Minister Andrej Babis) – rejected criticism that the Commission was not doing enough to stop and reverse the erosion of democracy.

“I don’t agree we are not doing enough,” the Czech commissioner said. “We launch infringement proceedings when we can.”

But she cautioned that the Commission had to ensure that any action was legally “robust”, otherwise it risked damaging its reputation, and the new conditionality tool requires the Commission to demonstrate that the breach of the rule of law causes damage to European funds. Critics argue that this requirement could drastically limit the use of the tool to catch breaches of the rule of law.

The Commission can also launch action against a member state under Article 7 of the Treaty on the Functioning of the European Union if there is a “clear risk” of the state breaching the bloc’s “fundamental values”. Both Hungary and Poland are currently under the Article 7 procedure. However, any final sanction requires unanimity in the European Council, and Poland and Hungary have said they will veto any move by the EU against each other.

“Article 7 is a symbolic tool,” Minister Beaune said. “It is a way to bang the door and say publically and loudly ‘there is a problem here’.”

The Commission can also launch infringement proceedings against a member state for failing to fulfil an obligation, and then take the issue to the ECJ if the state does not comply (under Article 258).

Jourova said the Commission had had success with its individual infringement cases against Poland and Hungary. But she admitted that they were insufficient, as they allowed countries to use what she called “salami tactics” to weaken democracy across the whole political sphere, step by step.

The verdicts of these infringement cases also often come too late. Last year the ECJ ruled that Hungary's 2017 "lex CEU", which was designed to close the American university, infringed academic freedom, but the institution had already been forced to move most of its teaching to Vienna.

“We need to see the bigger picture,” Jourova said, but added: “This is a big political problem that cannot be cured only by legal measures.”

Officials say previous governments gave out apartments and loans to magistrates and political figures at a total cost of around €25mn.