European Commission to decide in days on cutting funds to Hungary 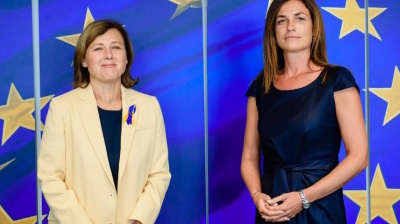 The European Commission may recommend the suspension of 70% of the €22bn funding available for Hungary from the 2021-2027 budget under the ongoing conditionality mechanism, local media reported on September 14, based on a report by Reuters, which cited EU officials familiar with the issue.

Such a move would demonstrate that the Commission is maintaining its firm stance against Hungary's democratic backsliding, and could worsen the dilemma facing Viktor Orban's radical rightwing regime as it struggles to cope with the ongoing cost of living crisis while at the same time keeping its yawning budget deficit under control and preventing a further slide in the value of the forint.

The EU’s executive body is expected to formalise its assessment on Hungary by the September 22 deadline, or some days earlier, which would be sent to the European Council, where a qualified majority of members states is required to have the measures take effect.

Budapest would have one month to react to the latest recommendation, but according to press reports, Hungary could be given more time to make good on its pledges before an unprecedented penalty comes into force.

Brussels has also previously frozen funds under the separate Reconstruction and Resilience Facility – designed to reinforce the bloc during the COVID-19 pandemic and help member states' transition to a green economy – over similar long-standing concerns over the rule of law. Budapest is due  €5.8bn in grants from the RRF and has also requested €9bn in loans from the facility.

Viktor Orban’s radical rightwing government responded to concerns aired by the European Commission last month, as Brussels deemed many of the government’s earlier commitments insufficient to tackle corruption and improve transparency of the public procurement system, the key stumbling blocks to reaching an agreement with the EU.

Hungary earlier promised to cut back the ratio of single-bid public procurements from 40%, one of the highest levels in the EU, to under 15% and to reduce the use of expedited procedures in legislation.

The government pledged to amend some dozen laws by the end of October aimed at making the public procurement system "transparent, cleaner and faster".

In September, cabinet chief Gergely Gulyas announced the establishment of an independent anti-corruption agency by late November and an anti-corruption working group by December.

Earlier this week, Hungarian MEP Benedek Javor leaked a letter by EU Budget Commissioner Johannes Hahn from July, which revealed that the cutback of Hungary’s access to cohesion funds between 2021-2027 could amount to HUF3.5 trillion (€8.6bn), a lower sum than reported on Wednesday.

Hahn, citing systematic flaws in Hungary’s public procurement and judicial system, asked the College of Commissioners to notify the Hungarian side of the Commission’s intention to apply financial sanctions.

On Wednesday, the European Parliament discussed a draft report by French MEP Gwendoline Delbos-Corfield (Greens/EFA) at a plenary session in Strasbourg The report is an update to the parliament's 2018 finding, after which the Article 7 procedure was triggered for the first time against a member state. The document’s assessment is that Hungary can no longer be considered a democracy but a hybrid regime, a term never used before for an EU country in an official EP document.

The situation in Hungary has not improved in the past four years, Justice Commissioner Didier Reynders said at Wednesday’s session. German Green MEP Daniel Freund warned that false promises of reform are not going to remedy what Viktor Orban has done in the past 12 years.

"Hungary is not a functioning democracy anymore, and Hungary does not respect the fundamental values that all member states agreed on to overcome war, despotism and state terror", he added.

On Fidesz's side, MEP Balazs Hidveghi called the conditionality mechanism shameful and an attempt of blackmail by Brussels.

Before MEPs discussed the draft report on Hungary, European Commission president Ursula von der Leyen in her annual address vowed to fight against corruption and strengthen the rule of law, which many viewed as a direct reference to Budapest, though she did not name the Hungarian government.

Hungarian assets sold off after the news broke. The EUR/HUF, which has rallied to 395 at the start of the week, jumped to 406 during the day and equities and bonds fell sharply on the prospect of Hungary losing EU funds.

The Hungarian currency, the worst performer among CEE peers with a 9-10% depreciation against the euro this year, has been on a rollercoaster ride in recent weeks. It traded in a wide range of 392-416 just in the past month.

The local currency has been under pressure from soaring energy prices and the lack of agreement with Brussels on the release of EU funds.