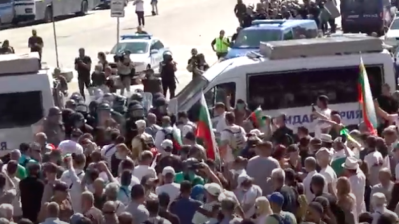 The European Parliament’s (EP’s) Committee on Civil Liberties, Justice and Home Affairs (LIBE) adopted a draft resolution on the worsening situation in Bulgaria on October 1, giving unequivocal support to the thousands of people who have been protesting for three months, demanding the resignations of the government and of chief prosecutor Ivan Geshev.

In the resolution, LIBE expressed concerns about the “significant deterioration of respect for the principles of rule of law, democracy and fundamental rights, including the independence of the judiciary, separation of powers, the fight against corruption and freedom of the media” in Bulgaria.

The resolution was backed by 35 of LIBE’s members versus 30 voting against it. It is due to be discussed by the EP on October 5.

“[LIBE] expresses its unequivocal support for the people of Bulgaria in their legitimate demands and aspirations for justice, transparency, accountability and democracy; firmly believes that peaceful demonstrations are a fundamental right in every democratic country and supports the right of people to peaceful protest; condemns any form of violence against peaceful demonstrations; underlines that freedom of expression and freedom of information must be respected at all times; highlights that the use of violence and disproportionate force is unacceptable,” the resolution said.

It expressed dismay at the allegations of use of force against women and children, including children with disabilities, during the protests.

LIBE noted it is concerned by the “unlawful and excessive audits of private businesses who have publicly expressed their support for the protests”, a reference to the local toy store chain Hippoland. The company became the subject of probes by the economic police, tax authorities and market supervision authorities under the direct supervision of the prosecution the day after its owner, Martin Kolev, wrote a critical post on Facebook about police violence at the protests.

LIBE also condemned the “violent and disproportionate” interventions by the police during the protests in July-September and called on the Bulgarian authorities to ensure a “full, transparent, impartial and effective investigation into the actions of the police”.

The committee expressed strong concern about the serious deterioration of media freedom in Bulgaria in the past ten years, calling on the local authorities to secure a proper environment for freedom of expression.

LIBE also condemned the numerous smear campaigns against journalists critical of the government, urging the authorities to launch investigations into all those cases. It called on the authorities to probe all cases of violence being used against journalists covering the protests, pointing out that “violence at the hands of state agents, is contrary to member states’ duty to uphold press freedom and to protect the safety of journalists”.

The committee slammed the “continuous lack of high-level corruption investigations yielding tangible results” and noted that corruption, inefficiency, and a lack of accountability continue to be pervasive problems in the judiciary. It pointed out that Bulgaria must conduct serious, independent and active investigations, as well as to achieve results in the fight against corruption, organised crime and money laundering. It called on the authorities to probe carefully all allegations of high-level corruption, listing recent scandals that included “audio recordings in the summer of 2020, the Apartment Gate, the Guesthouse Gate, the Tanker Gate, the Rosenets seaside estate case or the scandal around the alleged illegal transfer of money from the Development Bank, which taken together suggest deep and systemic weaknesses in rule of law and anti-corruption measures in Bulgaria”.

“[LIBE] deeply regrets that the developments in Bulgaria have led to significant deterioration of respect for the principles of rule of law, democracy and fundamental rights, including the independence of the judiciary, separation of powers, the fight against corruption and freedom of the media and manifests its solidarity with the people of Bulgaria in their legitimate demands and aspirations for justice, transparency, accountability and democracy,” the resolution said.

It criticised the inhumane treatment of migrants and prisoners, as well as the hate against Roma minority and the systematic deficiencies of the Bulgarian judiciary.

The resolution was welcomed by the protesters who gathered for 85th day in a row, urging the government of Prime Minister Boyko Borissov and Geshev to resign, accusing them of corruption and involvement with controversial businessmen and politicians. Protesters thanked LIBE, hoping that the EU has finally paid attention to their anger and calls for help.

The resolution was adopted a day after the European Commission released a very critical report on the lack of progress in fight against high-level corruption in Bulgaria, also expressing concerns regarding the pressure on media in the country as well as the slow progress in reforms to make the chief prosecutor accountable.