Even Russians protesting against Putin support the annexation of Crimea 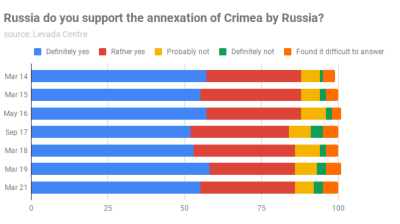 Of those that support Russian President Vladimir Putin's action, nearly nine out of ten Russians support the decision to annex Crimea, but even among those that disapprove of him, the move is supported by three quarters of voters
By bne IntelliNews April 27, 2021

The overwhelming majority of Russians (86%) consistently support the annexation of Crimea by Russia in 2014, even if they oppose Russian President Vladimir Putin, according to a recent poll by independent pollster the Levada Center released on April 26.

One and a half out of ten Russians (16%) of Russians believe that by annexing Crimea, Russia violated international obligations, whereas seven out of ten (71%) are sure it did not violate international law. These trends have remained consistent and compared to 2019, the differences are within the statistical error of the survey.