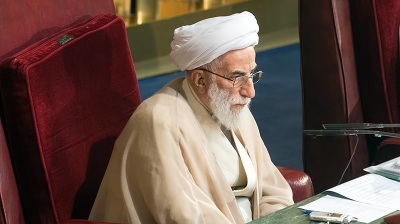 The US has hit 92-year-old Ahmad Jannati, head of the Guardian Council, with sanctions on the eve of the vote.
By bne IntellIiNews February 20, 2020

It’s election day in Iran and the situation could hardly be more confused.

Until the fatal arrival of coronavirus in the holy city of Qom this week, pundits simply had to discuss whether the hardline establishment’s mass disqualification of reformist and other candidates in the parliamentary polls (the 12-strong Guardian Council composed of clerics and jurists largely appointed by Supreme Leader Ayatollah Ali Khamenei rejected more than half the 14,000 candidature applications for various reasons, such as a lack of true Islamic faith, or good health) would result in a low turnout or whether the conservatives and clerics (Khamenei this week talked of Iranians’ “religious duty” to vote) would be able to rouse enough of their supporters to head for the polling stations on February 21 to both give them control of parliament and save the country’s blushes. But a low turnout could now be blamed on coronavirus. And it might be impossible to determine how many of the non-votes could be attributed to the call for a “no show” protest.

The clear fear among conservatives before coronavirus brought a strange turn of events was that if turnout proved to be too low, the result could be taken as a definite vote of no confidence in the whole Islamic Republic. One survey in circulation in Iran shows 75% of the country's 58mn eligible voters do not plan to vote. The conservatives may well still be anxious about a stark and embarrassing lack of people bothering with the ballot boxes, but they now have a ready excuse at hand.

At the University of Tehran this week, small groups calling for a boycott have displayed placards saying such things as: “The people are fighting poverty, the regime is looking for votes.”

Not surprisingly, the Trump administration—which is essentially responsible for the plight of the reformists in Iran by taking such an aggressive approach to the Islamic Republic that the conservatives can scold their opponents for ever having been naïve enough to expect the US to abide by its signed commitment to the 2015 nuclear deal—is meddling in the election. On February 20, Washington slapped new sanctions on members of the Guardian Council and its Elections Advisory Committee, citing its disqualification of candidates.

"The regime denies the Iranian people a representative Parliament by pre-deciding who is qualified to run for office," Brian Hook, US special representative for Iran, said to reporters.

Among those on the Council targeted by the sanctions are its chief, namely 92-year-old Ahmad Jannati, senior advisory member Mohammad Yazdi and Abbas Ali Kadkhodaei, who serves as the Council's spokesman. Two other senior officials were also targeted.

Following the sanctioning, a Twitter account believed to be that of Ayatollah Yazdi, carried the following post: "This is the most important exaltation from people of which their hands are soiled with Hajj Qasem Soleimani’s blood—I have been venerated by their sanctions. As Ayatollah Khamenei says, ‘Neither America’s judgement is helpful nor their sanctions.’"

Soleimani of course was the major general widely seen as Iran’s second most powerful official before he was assassinated by the US in early January with a drone strike at Baghdad Airport. The ramifications of what many experts on international law have concluded can only be described as an act of war outside of war are still playing out and could do for many years to come.

Iran has plentiful forex for Persian year ahead says president

"Iran has no problem in providing foreign currency until the end of the [Persian] year [in March, 2021]," Iranian President Hassan Rouhani told an April 2 cabinet meeting, citing information he said ... more

The US says it believes that Iran’s Ministry of Intelligence and Security was last November directly involved in the killing of an Iranian dissident in Turkey, according to a Reuters report. ... more

An Iranian state television journalist who is also a medical doctor on March 17 warned that the coronavirus (COVID-19) outbreak could claim the lives of "millions" in Iran if the public keeps ... more