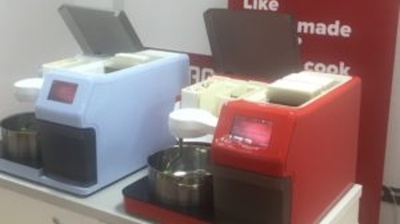 A new restaurant, Bots & Pots, where food will be prepared by GammaChef, a robotic chef capable of preparing one-pot dishes, will soon be opened in Zagreb, the Netokracija portal reported.

The GammaChef robot is currently learning from a professional (human) chef. GammaChef carefully records the recipes of traditional Dalmatian dishes and converts them into digital data. After that, the software makes sure that the robot repeats all the steps in preparing the dish, according to the instructions of a professional chef.

According to Netokracija, there will be five robots in the Bots & Pots restaurant, which means they will be able to serve up to 60 portions per hour. One robot can prepare 12 portions per hour (three pots of four portions).

Based in the small Croatian town of Mravince, near Split, GammaChef is was developed entirely in Croatia. Its founders say the aim is to “modernise and automate commercial kitchens while uncompromisingly maintaining the quality of prepared meals.”

Despite its small size, Croatia has seen the launch of numerous innovative tech firms, including others in the IT hardware sector such as Gideon Robots and smart bench company Include/Steora.