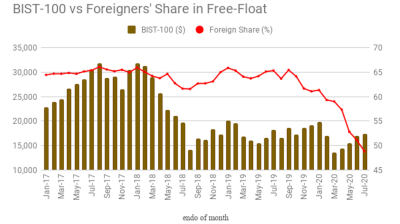 It was the first time since June 2004 that foreigners’ share in the stock exchange fell below 50%.

“The [market] is only 50% owned by foreigners now, the lowest I can ever recall, but volume yesterday was $5bn, which tells you that Turkish retail punters are driving this [market] right now, which explains the volatility and the trading rotation with biduous moves in punters' favourites. There has been a 30% increase in the number of retail brokerage accounts in 2020, a fresh 350k new chancers looking to make a few lira because bonds have no yield and they're stuck at home on the computer. This ends badly at some point. Turkey that is,” Julian Rimmer of Investec wrote on July 8 in an emailed note to investors.

On July 6, Borsa Istanbul applied a temporary short selling ban on six foreign financial institutions because they failed to notify the authorities about short selling transactions on July 3.

On June 30, the Turkish Capital Markets Board (SPK) lifted a ban on short selling for the top 30 shares on the Istanbul Stock Exchange. The ban is still in place for other stocks.

On June 24, Morgan Stanley Capital International (MSCI) warned it might start a consultation process that could result in Turkey being removed from its Emerging Markets index and reclassified as a Frontier Market or Standalone Market due to the short-selling and stock lending bans in October 2019 and February 2020 respectively.

Turkey had a weighting in the MSCI emerging market index of nearly 2% at the end of 2014, but it has now shrunk to 0.4%.

“Having been warned by MSCI that its short-selling ban imperilled its status within the EM benchmark, Turkey suddenly lifted its ban [on BIST-30 components] but then took individual measures against the main players,” Rimmer wrote, following the latest short-sale ban on leading investment banks.

Authorities have already burnt bridges with foreign investors by drastically limiting their access to the currency and making it difficult from them to trade Turkish assets, Bloomberg noted.

On May 7, the banking watchdog BDDK briefly barred Citigroup, BNP Paribas and UBS from trading the lira altogether for four days until the ban was lifted on May 11, the news service recalled.