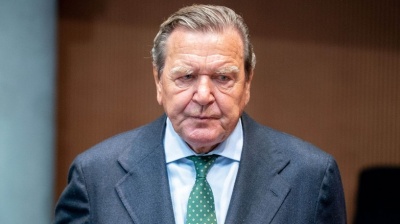 Former German Chancellor Schroeder meets with Putin in Moscow to call for peace in Ukraine / wiki
By bne IntelliNews March 11, 2022

Former German Chancellor Gerhard Schroeder flew to Moscow to meet with his close personal friend Russian President Vladimir Putin in an attempt to mediate in the war in Ukraine on March 10.

Schroeder and Putin became close while Schroeder was Chancellor from 1998 until 2005 and followed a policy of pushing German business interests in Russia during the boom years of the noughties. Germany now has literally ten times more companies registered in Russia than any other European country.

After leaving office Schroeder took a job as chairman of the shareholders committee of the Nord Stream gas pipeline operating company indecently quickly, bringing down widespread criticism. He was appointed in 2017 as chairman of Rosneft, Russia’s largest oil company and in February, Gazprom nominated him to join its board of directors.

In recent weeks Schroeder has faced mounting pressure to give up his board seats at Russian energy companies, in light of Moscow’s invasion of Ukraine.

Schroeder reportedly travelled to Moscow with his wife to speak with his friend Putin, at the urging of Ukraine. The federal government apparently knew nothing about the project, reports Politico and the German daily Bild.

The two men met on March 10 but it remains unclear if more meetings are planned.

On the sidelines of the EU summit in Versailles, German Chancellor Olaf Scholz refused to comment on Schroeder’s trip to Russia.

Schroeder’s wife Soyeon Schroeder-Kim published a photo of herself with her hands folded and her eyes closed on her Instagram page in the evening, with St. Basil's Cathedral on Red Square in Moscow in the background. According to dpa, Schroeder and Schroeder-Kim travelled to Moscow via Istanbul.

Since the start of the war Schroeder’s left-leaning SPD party has put heavy pressure on the former Chancellor to quit his lucrative Russian jobs. The leadership of the party has already sent an ultimatum to Schroeder to resign his mandates. A "prompt" answer is expected, party leader Lars Klingbeil said a week ago. A local SPD association has already tabled a motion to have Schroeder to be expelled from the party.

Klingbeil was cautiously positive about the trip on Germany’s ZDF evening news, saying that “anything that can bring the conflict to an end is welcome. We will see if it is of any use.”

According to Politico the trip was arranged by a Ukrainian politician. On March 7, the couple first travelled to Istanbul, where the former Chancellor met a Ukrainian delegation. His subsequent request for a meeting with Putin is said to have been answered positively within ten minutes. The couple were then taken to Moscow on a Russian plane on on March 9.

There has been no comment on the trip to Moscow from the Ukrainian government. The Ukrainian ambassador to Germany, Andriy Melnyk, told the German Press Agency: "I don't know anything about it." However, Melnyk endorsed Schroeder's attempt at mediation in an interview a week ago. "He is one of the few here in Germany who may still have a direct line to Mr Putin. There is no one who has something like that in Germany and the other European countries," said the ambassador to Bild.

Schroeder has said little about the Russian invasion of Ukraine since the beginning of the war. He called on Russia to end the war and the associated suffering for the people of Ukraine as soon as possible on the LinkedIn on February 24, the day of the invasion. At the same time, he emphasised that the political, economic and civil society ties between Europe and Russia should not be completely severed if sanctions are necessary.