FPRI BMB Russia: Do we know what we are dealing with? 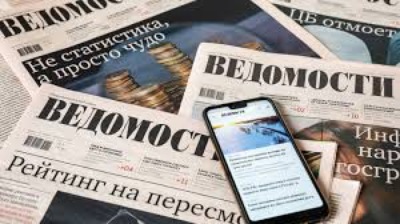 Banning Russian TV stations and other media sources only blinds us to what is really happening in Russia. Western governments need to be careful about limiting sources of information coming out of Russia, even if they are used for propaganda purposes. / wiki
By Alex Nice for FPRI BMB Russia in London April 12, 2022

At the start of this week, it was reported that the Russian Ministry of Energy had stopped publishing monthly data on oil production. This follows a decision by the Bank of Russia to classify data on its reserves and instruct banks not to publish some financial information. This has made it difficult to assess the health of the financial sector; on April 5, VTB head Andrey Kostin announced that the bank would be recapitalised, an announcement that came out of the blue but scarcely made the news.

Surprisingly, however, Russia has imposed few formal restrictions on statistical releases. RosStat has continued to make scheduled updates on prices and production, and the Ministry of Finance continues to report on the value of its (heavily sanctioned) sovereign wealth fund.

This could change at any time. With most foreign investment suspended, the government has few incentives to make data of this kind publicly available. Several other post-Soviet states, such as Azerbaijan and Uzbekistan, have maintained a functioning economy with far less publicly available information. Indeed, in conditions of economic warfare, which is how the Russian state perceives the West’s sanctions regime, one might expect the Russian government to treat economic data in the same way that it does information on the disposition of its armed forces.

While the government is still publishing data releases, our ability to understand what is really going on in Russia seems to diminish by the day. The new censorship laws have all but eliminated independent domestic journalism, and forced almost all foreign journalists to leave the country. Increasingly, people trying to understand Russia must fall back on reporting and interviews conducted at a distance, while trying to parse official and semi-official media and a flood of information through Telegram channels of varying levels of reliability.

Amid the horror of Russian atrocities in Ukraine, the US, EU and UK still need to think carefully before they sever the few remaining channels for gathering information about Russia’s internal development. More than ever, we need an accurate picture of Russia’s politics and economy. For example, diplomats should be expelled when they pose a risk to national security. But doing so for symbolic reasons only means that Western states lose an equivalent number of eyes and ears in Moscow. Likewise, the UK’s decision to withdraw the broadcasting licence of RT, a station with a tiny audience footprint in the UK, will only make it harder for British journalists to operate in Russia. Similar considerations apply to academic exchanges.

Russia’s strategic blunders in this war are the product of a closed political system relying on a distorted view of Ukraine that was not subject to external challenge. Western states shouldn’t allow themselves to fall into the same trap with regard to Russia.

The Russian government continues its campaign against independent media. Roskomnadzor blocked two more media outlets this week, Kholod and Diskurs, although both publications say they will not stop their work. “We intend to continue to tell the truth about what is happening in Russia and Ukraine, albeit in a blocked form,” said Kholod's editor-in-chief Taisiya Bekbulatova. Additionally, independent newspaper Novaya Gazeta was forced to suspend its operations in Moscow last week. However, the paper will be re-launching a new European edition, Novaya Gazeta Europe, based in Latvia, which will be written by some of the original paper’s staffers who have chosen to leave Russia.

The Ministry of Justice has again expanded the list of so-called “foreign agents.” Six people were added to the list: journalists Irina Borukhovich, Ekaterina Mayakovskaya, and Andrei Filimonov; lawyer Mark Feigin; historian Dmitry Dubrovsky; and rapper Ivan Dremin, otherwise known as Face. In response, Face wrote in an Instagram post: “Thanks for the best birthday present ever! The first foreign agent rapper! A huge honor and evidence that I am doing everything right.” Additionally, a draft bill was introduced to the State Duma that would make it easier to revoke media licences for outlets “disrespecting” Russia’s government or publishing “fake news” from other sources. “They want to prohibit us from citing The New York Times, Der Spiegel, Le Monde and other colleagues,” said Kommersant reporter Elena Chernenko. This comes just a few weeks after the Duma passed a law making the dissemination of “fake” information about the war punishable by up to 15 years in prison.

Meanwhile, several major social media sites are further restricting access to Russian state media. Twitter is taking measures to combat state propaganda by no longer recommending Russian state-controlled accounts to users. Twitter had already blocked the accounts of state-run media outlets RT and Sputnik in Europe. “We will not amplify or recommend government accounts belonging to states that limit access to free information and are engaged in armed interstate conflict,” said Twitter’s statement. YouTube blocked the account of “Duma TV,” the official channel of the State Duma. This channel broadcasted Duma meetings and interviews with deputies. In response, Russian Foreign Ministry spokesperson Maria Zakharova said: “Apparently, YouTube has signed its own verdict. Save content, transfer to Russian platforms. And quickly.”