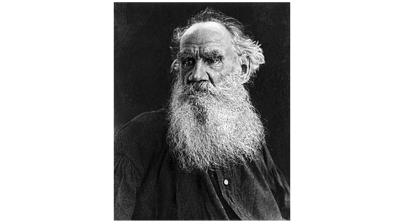 Ukraine will remove the study of Tolstoy's War and Peace from the Ukrainian school curriculum because it is Russian. But the culture of the two countries will be hard to unravel: one of Russia's most famous writers, Gogol, was born in Ukraine and his books are steeped in Ukrainian culture. / wiki
By FPRI BMB Ukraine June 13, 2022

“Everything that orc troops celebrate will disappear from the foreign literature programme,” declared Ukraine's Deputy Minister of Education and Science Andriy Vitrenko on June 7. Vitrenko was announcing planned changes to school curriculum in Ukraine, which, going forward, will no longer include Leo Tolstoy’s famous novel War and Peace.

The prospect of removing Tolstoy’s masterwork from Ukrainian schools was met with a wave of protests in Europe. Of course, not everyone reacted in the same way. Besides the sincere and understanding regrets of some in Europe, others, like Hungary’s Zsolt Bayer, Viktor Orbán's chief propagandist, took the opportunity to compare Ukraine to Nazi Germany in a video worthy of the best Kremlin productions.

Propaganda aside, the subject remains difficult to navigate, especially since many writers of Ukrainian origin wrote many of their works in Russian. Perhaps the most notable example is the 19th century writer Mykola Hohol (known in Russian as Nikolai Gogol), who grew up in Ukraine. Most of his novels are bathed in Ukrainian culture, and it was his evocation of Ukrainian folklore and peasant traditions that launched his career.

Even some contemporary Ukrainian writers write in Russian, including author Andrey Kurkov, who is particularly well known abroad. “I have come up with different ways of explaining that the language is not to blame. […] Putin does not own the Russian language. That many defenders of Ukraine are Russian-speaking,” Kurkov wrote in The New Yorker back in March.

Other Ukrainian cultural figures see a break with Russian language and culture not only as a natural response to Moscow’s war against Ukraine, but also as part of a long overdue reckoning. “Russian culture created the conditions in which the average Russian was raised. It served as a shield that covered up the crimes committed by the Russian state,” journalist Bohdana Neborak told Apofenie Magazine. “For centuries, the world has understood Russian culture in the narrowest sense – that is, the novel, ballet, art. But even this ‘high’ culture has grown due to the oppression of other nations.” Indeed, Russian culture has a long history of being intertwined with the state’s imperialism. And judging by Vladimir Putin’s recent remarks comparing himself to Peter the Great, and Russia’s invasion of Ukraine to the tsar’s expansionist wars in the 18th century, Moscow is becoming increasingly flagrant about its imperial ambitions.

But if Putin hoped to reaffirm the existence of the “Russian world” in what he sees as the cradle of Slavic cultures – Ukraine – embarking on a brutal war of conquest has done just the opposite; it has pushed an increasing number of Ukrainians to turn their back on Russian language and culture, likely forever.