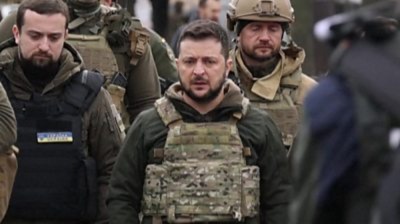 Progress in the peace talks between Russia and Ukraine seems to have stalled on the questions of Donbas, Crimea and the details of a security guarantees. / wiki
By FPRI BMB Ukraine April 5, 2022

As Russian troops retreated from areas around the Ukrainian cities of Kyiv and Chernihiv over the weekend, photos and videos emerged of the summary execution of civilians and mass graves. The most shocking images were from the town of Bucha, just outside Kyiv, which Ukrainian forces retook on Saturday, 2 April. Corpses were found lying in Bucha’s main street – some of which had their hands tied behind their backs.

Ukrainian President Volodymyr Zelenskiy quickly accused Russian troops of war crimes and genocide. Russia denies the allegations, and the Russian Ministry of Defence said on Sunday that the video and photo evidence was a “provocation”. State-owned news agency RIA Novosti claimed that the West was trying to fabricate a “Ukrainian Srebrenica”.

On a visit to Bucha on Monday, Zelenskiy warned that the behaviour of Russian troops could make peace negotiations much harder. "It's very difficult to talk when you see what they've done here," Zelenskiy told journalists. "The longer the Russian Federation drags out the negotiating process, the worse it is for them and for this situation and for this war."

Prior to the Russian retreat, a meeting in Istanbul last week between the two sides had generated some guarded optimism that a ceasefire might be possible. The Ukrainian delegation unveiled a proposal for a future ceasefire deal which, according to The Bell’s sources, had largely met with Moscow’s approval. However, significant disagreement remains on several fundamental issues.

For Ukraine, it’s important to appear as the initiator, a source close to the negotiations told The Bell. The same source believes Russia is moving toward an agreement because any further military action would mean combat in cities and a repeat of the carnage in Mariupol.

The Ukrainian proposals boil down to:

At the same time, it’s important to point out major sticking points:

Russia confirmed that a meeting between Putin and Zelenskiy was possible, but refused to commit to a time frame. On Friday, Turkish President Recep Erdogan – who has emerged as a key intermediary in the negotiations – mentioned the possibility of a summit. However, the previous day, Italian Prime Minister Mario Draghi, who took a phone call from Putin to discuss the possibility of paying for Russian gas in rubles, said the Russian president had told him that talk of a ceasefire was “premature”.

Either way, it’s clear the situation could change at any moment. As well as evidence of atrocities committed by Russian troops and the likelihood of a new round of Western sanctions, the retreat of Russian forces from around Kyiv has drawn stinging criticism from conservatives and nationalists back home. “We are leaving Kyiv. I’m neither a politician nor a general, nor do I have the full picture in front of me. I don’t know why this was decided,” one of the country’s best-known pro-Kremlin war reporters, Alexander Kots, wrote on social media Friday. “Throughout these six weeks I have been with my army. Nothing and nobody can detract from their achievements. They could not be taken in battle,” he said, apparently hinting that the military was stabbed in the back by the politicians.

One of the biggest “hawks” in Russian politics, Chechen leader Ramzan Kadyrov, also expressed opposition. “We make no concessions,” Kadyrov said in a video. “Medinsky [the leader of the Russian delegation at the talks] made a mistake and drew up an inappropriate statement.” Kadyrov pledged Russian troops would take Kyiv if Ukraine did not accept Moscow’s demands. Other advocates for continuing the war reportedly include State Duma speaker Vyacheslav Volodin and TV propagandists such as presenter Vladimir Solovyov.

An incident on Friday morning could also become an issue in future talks. At about 6am the head of Russia’s Belgorod Region reported a fire at the city’s oil depot; half an hour later, he said it was due to an airstrike by two Ukrainian helicopters. Later, a video emerged on social media supporting this claim, which was backed up by independent experts. The fire was not brought under control until that evening. Ukrainian officials have refused to confirm or deny the involvement of the Ukrainian military, which suggests it was a Ukrainian attack.