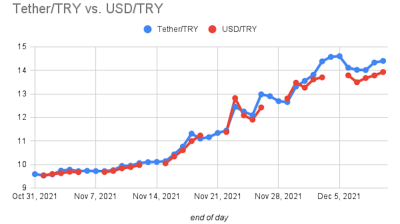 An ongoing widening of the gap between Tether/Turkish lira (USDT/TRY) and the USD/TRY pairs has been seen since the beginning of December, BloombergHT reported on December 10.

Theoretically, a Turkish bank can buy one dollar on the interbank market for TRY13.80. Then, it can buy one Tether with its dollar. Then, it can sell its Tether for 14.30 Turkish liras, earning a lira-denominated arbitrage of 4%.

On December 3, the gap amounted to a record high of 70 kurus. It has hovered around 50 kurus since then.

During the weekend of December 4-5, the gap was seen at 1 lira. During weekends, the USD/TRY market is closed, but the Tether market stays open.

The reason for the anomalies in the Turkish lira pairs was Turkey’s moves, commencing on December 1, to again intervene in the interbank market.

On the afternoon of December 10, the central bank confirmed a third day of interventions in the market.

The band in the USD/TRY is narrowing via the lower boundary and it is obvious that it will break through and move north. The lower boundary reached 13.74 on December 12 with the third intervention.


Since November 2018, Turkey’s currency regime has been an undeclared managed float, or, more technically, a dirty float.

In November 2020, the country’s usable reserves were used up. President Recep Tayyip Erdogan staged one of his infamous U-turns and switched to an “orthodox” story.

In March, Erdogan fired the “orthodox” governor and a story of “retail accounts” was put into circulation.

On April 5, bne IntelliNews noted: “Some derisory attempts at intervening in the USD/TRY market via ‘retail’ accounts were seen, but local FX-holders are not about to believe in anything the Erdogan regime’s numbers say.”

On April 19, this publication warned: “The ‘retail’ accounts story, meanwhile, remains evident in the USD/TRY chart… After the country has lost its remaining FX, details of this issue will also emerge as an undeniable fact.”

In November, there were no “retail accounts” around while the USD/TRY was breaking consecutive records.

Critics in the corridors will tell you that the accompanying discourse produced by the Erdogan regime has been getting more and more hilarious as time goes by. In November, the story was that the lira was intentionally depreciated as part of a “policy”.

Funnier still, the next suggestion circulated was that the lira would depreciate to a certain point where it would stabilise by finding its own hook.

Since, on December 1, the central bank announced that it was directly intervening in the FX market, Erdogan’s officials have been defending the 14-level in the USD/TRY.

Also on December 1, bne IntelliNews noted: “The USD/TRY market is totally off the rails. The volatility is extreme. Different sources provide different rates. This publication references Investing.com but the server may not reflect the actual price seen on your trading screen.”

When it comes to the number of different exchange rates in different markets, Argentina is the king while Turkey is plodding through.

In April 2019, we noted: “Since last November, the Turkish central bank and public lenders have managed to put something of a brake on the lira—although the government in amateurish fashion has been setting crude horizontal barriers at the cost of burning through reserves. Its approach has been supported via external borrowing at terrible expense and has prompted nervous locals into buying FX, substantially adding to the strain on the lira.”

The latest crude barrier, which will be destroyed by the power of supply and demand, is the 14-level.

In currency forecasts, the real question is “When?” The finance industry says “in the next 12-month period” while Turkish fortune-tellers says “in up to three terms” …

On December 15, the Fed will be watched for the results of its open market committee meeting.

On December 16, Turkey’s central bank will release its next rates decision. The market expects a 100bp cut.