Gazprom extends its lead in the King of the castle race 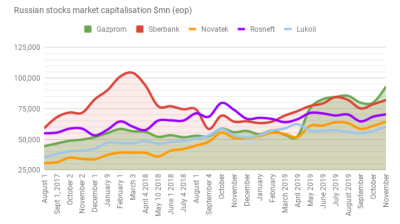 The shares of Russia's gas giant Gazprom have soared 74% YTD to make it the most valuable company in the country, worth $93bn
By Ben Aris in Berlin November 16, 2019

State-owned gas company Gazprom extended its lead over rival state-owned banking giant Sberbank in the stakes to be Russia’s most valuable company, after its market capitalisation stepped up by over $10bn in November to make the company worth $93.1bn as of the start of November. Sberbank’s market cap rose on the month by $4bn to a total of $82.1bn, putting it into second place.

Russian stocks are having a banner year as investors return to the Russian equity market and are currently overweight. As bne IntelliNews reported, the Russian stock market is currently the best performing in the world, with the MSCI (Russia) index up 44% year to date, dollar denominated Russia Trading System (RTS) index up 34.4% YTD and the ruble denominated MOEX Russia Index up 23.3% YTD as of November 14.

A variety of factors have gone into lifting the index, apart from a so-called Santa Rally that happens every year in the last quarter. Chief amongst the positive factors is receding fears of new and harsh US sanctions, growing corporate earnings, sustained high dividend payouts and a mild economic recovery.

However, Gazprom’s stock has had an even better year, storming passed Sberbank to become the king of the castle in June when its share price jumped some 30% in a day after the management unexpectedly doubled the company's dividend payout, lifting its market cap to $82bn in the process.

So far this year Gazprom’s shares have earned investors a 72% return as of November 14 against Sberbank’s, still very respectable, 39%, which is also better than the 33% the publically traded financial sector as a whole has returned and better than the RTS as a whole.

The rising in the index has been driven by a limited rerating of the market as a whole. While Russia remains in conflict with the West over issues such as the war in Ukraine and the annexation of the Crimea in 2014, Russia’s numerous recent foreign policy successes, such as the stabilisation of the situation in Syria, the “honest broker” status President Vladimir Putin has gain in the Middle East conflicts, especially between Iran and Saudi Arabia, and rapprochement with Turkey, have led to European leaders such as French President Emmanuel Macron reaching out to Russia and calling for a reset.

At the same time, at a corporate level Russian companies have been doing very well and with high dividend payouts and rising earnings per share investors have been cherry-picking amongst the shares. The utilities sector stands out in particular. Utility stocks have performed particularly well and were up 29% as of November 14, as the sector is in the midst of a major reform that should lift valuations further. Last year it was metals & mining and oil & gas stocks that did well on the back of rising commodity prices.

However, despite the gains, Gazprom’s market cap is still well off the circa $300bn it was worth in 2008, when CEO Alexey Miller boasted the company would become the world’s first ever trillion dollar stock. During the subsequent crisis Gazprom’s market cap fell to a low of $56bn.

Not only has Gazprom recovered a lot of the ground lost but its stock has outperformed the other leading bluechips with more recent gains. In addition to promising to hike dividends to 50% of income next year, in an increasingly creditable promise, several of the company’s big investment projects are winding down. The Power of Siberia gas pipeline to China is almost completed. The TurkStream gas pipeline to south-eastern Europe is also almost done.  And the controversial Nord Stream 2 pipeline has cleared its final hurdle and will be completed some time in May. In theory, the end of these mega projects will leave Gazprom with more cash available to distribute to shareholders.

Since then Sberbank has been the only company to break through the $100bn market, in 2017, but its share price has underperformed since. However, next year the bank promises to increase its dividend payouts to 50% of its income, which might lift the valuations again.

Finally, the two privately owned companies at the top of Russia’s market – oil company Lukoil and gas company Novatek – continue to grow steadily, but are now being outpaced by their state-owned peers.

Much liked by investors, Lukoil and Novatek have closed the gap on their peers in the last few years, but Lukoil’s stock was up 32% YTD and Novatek up 21%, to give them market caps of $62.2bn and $62.4bn respectively.

While the rapid gains of the state-owned companies can be attributed to the rerating that has following a change in political risk, the gains made by Novatek and Lukoil are probably much more to do with normal gains made by expanding business.

Some analysts believe the current rally will run out of steam in 2020. “We are overweight Russia now, but you should sell up before the holidays, as Russia is due a duff year,” said Julian Rimmer in his most recent market comment.