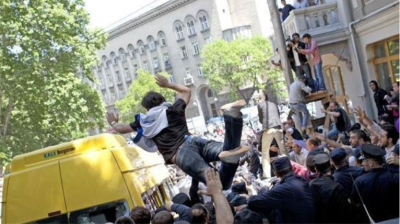 Scene from protests that took place in Tbilisi in 2013. Gay rights activists were pursued and beaten after thousands of protesters opposing homosexuality broke through a police cordon. / VOA, Public domain.
By bne IntelIiNews July 28, 2021

On July 5, a homophobic riot took place in Tbilisi. While the riot was a tragedy, it also reflected the contention, as explored by OC Media's Datablog, that Georgia is the most homophobic European country, a conclusion for which data is available from the International Social Survey programme (ISSP) survey.

Given the participation of priests in the riot, one might expect more religious people to be more homophobic. However, the data suggests that homophobia is prevalent throughout Georgian society and how important religion is in someone’s life is not correlated with homophobic attitudes.

The ISSP survey asked respondents in 33 countries, mainly in Europe, whether sexual relations between two adults of the same sex were always wrong. In Georgia, 84% said they were always wrong, compared with an average of only 37% among all the surveyed countries.

The second most homophobic country in the survey results was Turkey, with 80% of the public there reporting that same-sex sexual relations were always wrong. By comparison, only 69% of Russians said the same. In Hungary, which the European Union is currently suing for passing homophobic legislation, roughly half as many (45%) people said they were always wrong. Georgia’s South Caucasus neighbours Armenia and Azerbaijan were not part of the survey.

The active role played by priests in the recent riots in Georgia was perhaps unsurprising given that priests also engaged in violence in the homophobic riots that hit the country's 2013 International Day against Homophobia and Transphobia. Furthermore, the church in Georgia established the ‘Day of Family Purity’ in the years following the 2013 riots to prevent events marking the international day from being held.

While Orthodox countries appeared to be more homophobic overall than countries where other religions predominate, how strongly someone evaluates the importance of religion in their lives was not correlated with whether or not they held a homophobic view. This suggests that religious belief is not necessarily the issue; rather, that generalised homophobia in society is.

A conclusion is thus that the riots seen on July 5 underlined that Georgia has a problem with homophobia, to put it mildly. The data suggests the problem is among the worst in Europe. Yet, while the church instigated violence, individual religiosity does not appear to be the culprit in whether or not someone is homophobic.

US charges Iran operative with plotting to kill former Trump hawk John Bolton
38 minutes ago
Ukraine will receive $5.5bn in support from the US later this month
15 hours ago
John Malkovich to turn Skopje into Hollywood of the Balkans
15 hours ago
Envoy says start made on construction of Turkish attack drone factory in Ukraine
1 day ago
Huge explosion rocks Russian airbase on the Crimean peninsula
1 day ago