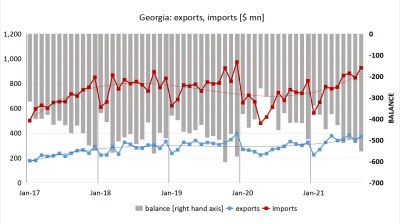 The trade deficit of Georgia widened by 21% y/y to $4.05bn in January-September, but this was 0.5% less compared to the gap in the first nine months of 2019, according to data from the statistics office Geostat.

The outstanding trade gap – one-quarter of the country’s GDP – was financed from remittances, which against expectations have strengthened during the pandemic,  and by robust public borrowing.

Furthermore, a significant increase in the domestic exports is visible and it has prevented even tougher tensions within the balance pf payments.

The domestic exports of food products also increased significantly, yet with a smaller impact on the total figure. Thus, the exports of hazelnuts (2.3% of total) and apricots, cherries, peaches, plums and sloes (fresh, 1.5% of total) surged by 130% over the two-year period.