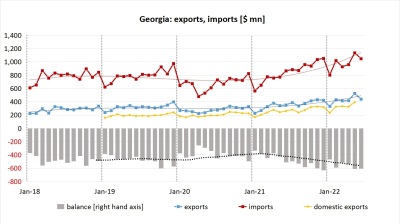 Georgia exported $439mn of goods in June, marking a y/y 25% increase compared to the same time in 2021, according to the National Statistics Office of Georgia.

The trade deficit consequently widened by 19% y/y to $609mn in the month.

The detailed foreign trade data will be published on July 19.

In Q2, Georgia’s exports, dominated by copper ores and concentrates and ferro-alloys, increased by 29% y/y to $1.38bn - after a stronger annual growth rate of 43% y/y in Q1.

Higher commodity prices have pushed up Georgia’s imports as well.

The robust local currency, which is slightly strengthening versus the US dollar, is conductive to local demand and apparently hasn’t impacted the main categories of exports.

Compared to Q2 2019, the country’s imports rose by 36% – slightly slower compared to the exports’ 43% advance over the past three years.

Imports of crude oil and petroleum products rose by 80% y/y in January-May, while the imports of natural gas rose by 40%. Altogether, the two categories accounted for over 15% of total imports.

Central bank and IMF to upgrade forecasts for Georgia’s economy