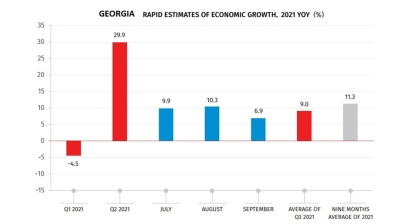 By Iulian Ernst in Bucharest November 1, 2021

More impressively, growth turned positive for the second consecutive quarter compared to 2019, the year before the coronavirus pandemic hit the country’s tourism-dominated economy.  Furthermore, this performance was driven by sectors other than tourism, which has not fully recovered to pre-pandemic levels. Thus, Georgia’s economy strengthened by 4.9% compared to Q3 of 2019. The growth rate calculated on the comparison to two years ago was 13.9% in Q2.

For the whole January-September period, the economy of the South Caucasus country expanded by 5.7% compared to the same period of 2019. In annualised terms, this means 2.8% per annum, which is just over half of the annual growth rate in the pre-pandemic period, but an impressive performance, given the magnitude of the shock generated by the fall in tourism in 2020-2021.

The figures released by the statistics office prompted even stronger expectations from the government.

"The figures give us hope that we can end the current year with double-digit growth," said minister of economy Natia Turnava.

"This means that there are positive trends in the tourism sector and the sector will soon reach pre-pandemic levels," she said.

The tourism figures don’t support such optimism, though, even if the September data show some improvement. But given growth was driven by other sectors of the economy, officials can celebrate something good for the diversification of the country’s economic structure.

According to reports of the National Bank of Georgia, the country's economy received  $865.8mn in total tourism revenue in January-September, some 60% more compared to the same period of 2020 – yet only one-third of the $2.6bn revenues reported in January-September 2019.

Inflation in Georgia peaks at 13.9% y/y in December

Georgian Airways files for insolvency, put up for sale
World Bank forecasts Georgian economy to grow by 5.5% in 2022, 5% in 2023
Inflation in Georgia peaks at 13.9% y/y in December